Awards applications for the new round of the international competition Securing Water for Food can be funded between 100,000 and 2 million US dollar.

The latest call seeks exceptional innovations that have already demonstrated their success during pilots that go beyond traditional development programs and conventional approaches.

The total budget is 7,5 million US dollar. Applications will be accepted through October 10. 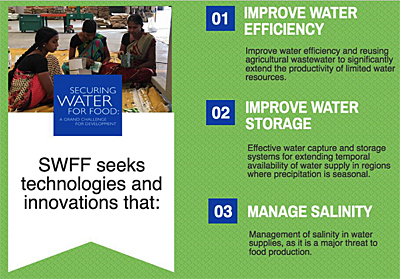 Innovations for farmers
Launched in 2013, Securing Water for Food aims to increase access to innovations that help farmers produce more food with less water, enhance water storage, and improve the use of saline water and soils to produce food.

In its first three rounds, 30 winners have been selected out of nearly 1,000 applications from universities, start-ups, and NGOs in more than 93 countries.

Innovations range from crops for saline environments and flying water sensor technologies to organic seed protectants that defend against drought and heat stress.

More drought, more mouth to feed
“As we see more and more droughts all over the world and surpass the one billion mark of people who don’t have enough food to eat, it is increasingly clear that we need better innovations to help our planet’s farmers grow more food with less water," said Christian Holmes USAID's Global Water Coordinator.

To solve this problem, the Securing Water for Food partners will direct 32 million US dollar by 2018 to fund and accelerate innovations that can disrupt the current water-food security nexus. 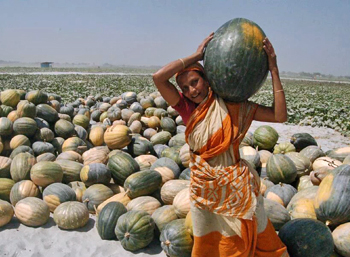 Strength role of women
This 4th call for proposals has an increased focus on cutting-edge, advanced technologies and business models.

Sweden’s Ambassador to the United States Björn Lyrval notes that, "For Sweden, gender equality is stressed in all development cooperation, which is strengthened by our feminist foreign policy. In sub-Saharan Africa, women produce as much as 80 percent of the food. It is therefore crucial that Securing Water for Food continue to strengthen the role of women."

Learn more about the Securing Water for Food Round 4 call for innovations: www.securingwaterforfood.org/apply

This news item was originally published on Securing Water for Food.

Adaptive Symbiotic Technologies (India) entered on a previous call with their exceptional innovation using endophytes fungi to increase the tolerance of crop plants to drought, salt and temperature stress. See the video below