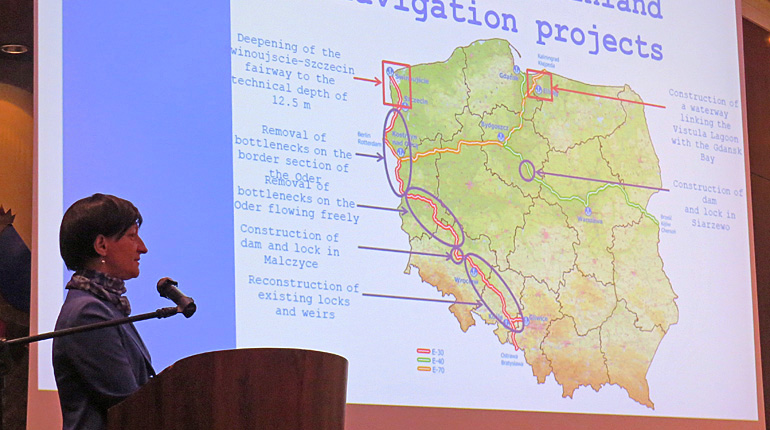 ‘By 2030 all main Polish rivers need to be used for inland navigation’, announced Polish Deputy Minister Anna Moskwa of Maritime Economy and Inland Waterways. She was delighted with the support of the Netherlands for this huge piece of work that was showed at the special seminar ‘Transport Connects, Water Unites’, in Warsaw on 10 October. The seminar was organised on the occasion of a Dutch water and maritime trade mission to Poland. 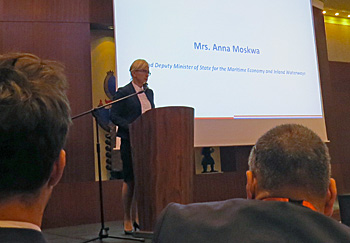 Transport corridors
According to deputy minister Moskwa the seminar took place at a very special occasion as the Polish government has recently introduced a new water law and Poland is now reforming its water management.

The renewed approach on water management focuses on combining Polish rivers closely to inland navigation and the integration of Polish water ways in the trans-European transport network (Ten-T) corridors.

The restoration of the main Polish rivers started off as flood protection projects after severe floodings in 1997, 2001 and 2010. This has led to a new flood protection plan that is combined with making the river Odra and Wisla accesible for inland navigation. ‘Following the recent water shortage we now also seek for a  better balance of our river management and we consider floods and droughts as two closely related issues’, said Moskwa. 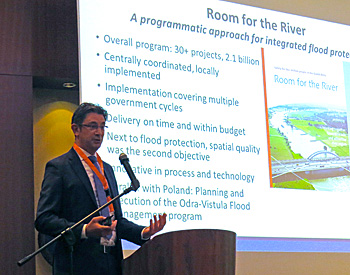 Representing the Dutch Topsector Water & Maritiem, Frank Goossensen told about the integrated flood protection the 'Room for the River' programme.

Seeking trade offs
On behalf of the Dutch delegation, Frank Goossensen of Top Sector Water & Maritime suggested deputy minister Moskwa to seek trade-offs by combining the multiple goals on project level. As an example he mentioned the Room for the River project near Nijmegen, the Netherlands.

According to Goossensen, the Room for the River project brings Nijmegen multiple advantages, since flood protection and urban development go hand-in-hand the project. The river levee was laid back 350 m so the city is now less prone to flooding. And at the same time two new bridges have been constructed to connect new housing development on the other bank of the river. The housing development contributed to economic development of the city.

Goossensen invited the Polish Deputy Minister to team up with Dutch partners who were involved in the Room for the River project.

Involving less enthusiastic stakeholders
Director Monika Niemiec-Butryn (top photo), responsible for the inland navigation at the ministry, explained at the seminar how Poland envisions new navigation corridors from north to south and east to west. Many feasibility and cost-benefit studies are underway and will be followed by Environmental impact studies next year. ‘That will be our most challenging part’, predicted Niemiec-Butryn, ‘as there are several Natura 2000 sites along the rivers’.

Niemiec-Butryn invited her Dutch counterparts to share their experiences on getting less enthusiastic stakeholders on board. ‘How can we show them that the river restoration and the navigability are a real good ecological option for moving goods?’. She announced the development of a strategic plan to combine the goals on flood protection, inland navigation and waterfront development. ‘With Dutch cooperation we may to be able to beat the success of the international renowned Room for the River programme’, she concluded challenging.