What are you looking for?
News 2 September 2015 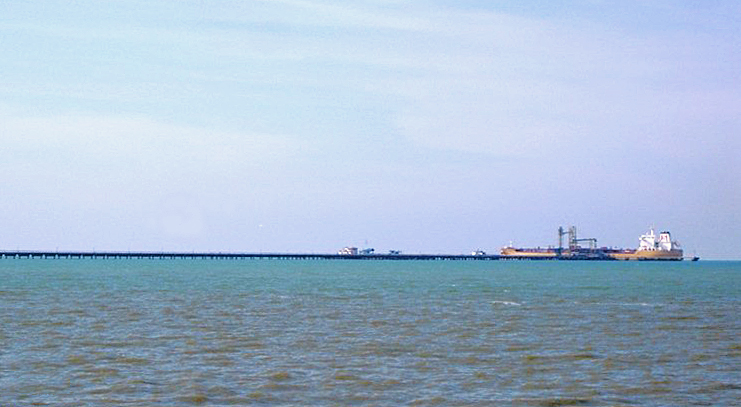 The Port of Rotterdam Authority has signed a partnership agreement with Indonesian port corporation PT Pelabuhan Indonesia I for the development of the new deep sea port Kuala Tanjung in North Sumatra, Indonesia.

The Port of Rotterdam will carry out a feasibility study for the new port together with PT Pelabuhan Indonesia I.

The agreement was signed by director of Pelindo 1, Bambang Eka Cahyana and CEO Port of Rotterdam Allard Castelein in Medan on 27 August. 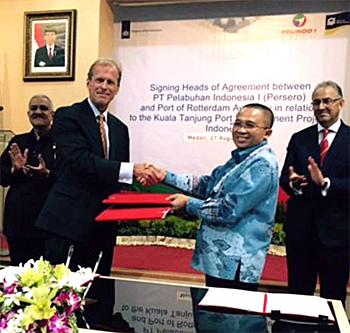 Depending on the outcome of this feasibility study, the Dutch port authority will assess whether it will enter into a joint venture with Pelindo I for the further realisation of the port.

CEO Allard Castelein signed the agreement on behalf of the Port of Rotterdam: "We want to share our knowledge in the construction, development and management of Kuala Tanjung. We are confident that the Port Authority and Pelindo I will form a strong team that will serve the country and provide a better future."

Mr Castelein participated in a Rotterdam delegation that travelled through Indonesia under the leadership of the mayor of Rotterdam, Ahmed Aboutaleb.

The mayor was present during the signing and indicated that he hoped that the new port will create many new jobs in Sumatra. "This is a good opportunity to develop new activities and to attract investors."

Participation in foreign port developments
The development of a deep sea port in Indonesia is consistent with the Port of Rotterdam Authority's foreign policy to create opportunities for Dutch companies abroad.

Participation in port development in countries that are of interest to the port is one of the ways in which to achieve this.

This is why, in 2003, the Port of Rotterdam signed a joint venture with the Sultan of Oman – Sohar Industrial Port Company – for the development of the Port of Sohar, and also why it is focusing on developing Porto Central in Brazil.

Indonesian national maritime strategy
Kuala Tanjung is a newly to be developed port near the city of Medan located in the Strait of Malacca, one of the most important shipping routes in the world.

Indonesian president Joko Widodo has made the strengthening of the maritime sector a spearhead of his policy in order to promote economic growth (6-7% per year).

Kuala Tanjung is one of the main projects in this national maritime strategy.

This news item was originally published on the websites of Port of Rotterdam and PT Pelabuhan Indonesia I.