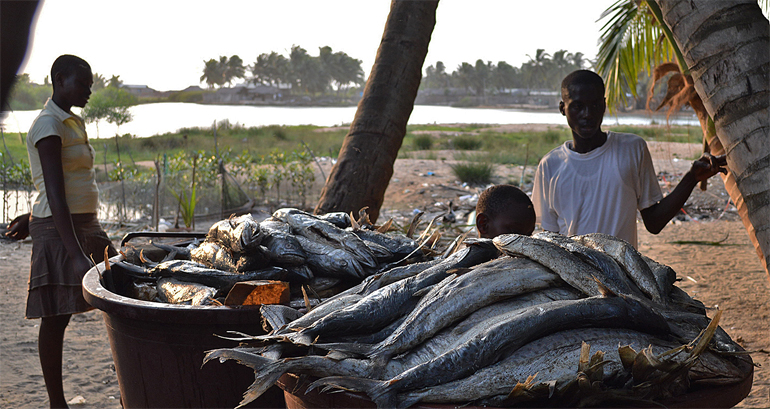 Researchers from the Delft University of Technology and the Delta Alliance joined forces with the Ghanaian Development Institute and the University of Ghana, in Accra to discuss the challenges for integrated planning and sustainable management of the Volta river delta.

At two recent workshops Dutch and Ghanaian experts recognized that the problems in the delta relate a lack of land use planning and a limited enforcement capacity of local authorities. It was concluded that the key challenge is to develop a plan that balances nature conservation and development and that is integrated within the traditional governance structures.

This is reported by urban deltas researcher dr. ir. Peter van Veelen at the Delft University of Technology (TU Delft) in a long read on the website of TU Delft WaterViewer. 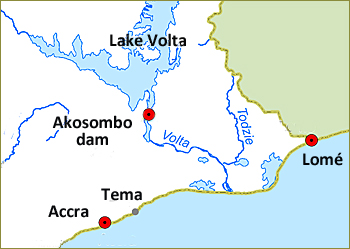 The Akosombo dam has large impact on the lower delta of the Volta river.

Rich natural environment
Coastal erosion, flow loss on the Volta river due to the Akosombo dam and poor land use planning, are some of the interacting problems the Volta river delta is facing.

According to Van Veelen the river delta is one of the few African deltas that is not yet urbanized and still has a rich and partly intact ecosystem. Its coastal lagoons and creeks serve as good breeding grounds for fish species and for migrating bird species.

Lack of sediment
The ongoing strong coastal erosion is one of the more urgent issues, writes Van Veelen. Although data is generally incomplete or poor, the coastal erosion is partly attributed to a lack of sediment that is trapped behind the dams in the Volta river. Other contributing circumstances are effects of sea level rise and associated change of coastal currents along the West African coastline.

Another serious problem is the illegal sand winning, driven by the city expansions of Accra and Tema. The illegal sand mining causes further coastal erosion of the beach and the natural flood protection. 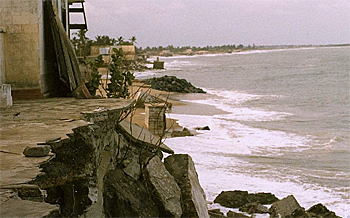 Coastal erosion in the village of Keta.

Stabilization versus access
On average, the rate of loss of land is estimated to a range between a 1- 2 m a year. Already, some coastal villages and infrastructure are lost to the ocean.

Engineering solutions such as the construction of groins and revetments stabilized parts of the coast but block access to the coast, affecting traditional marine fishing activities. The construction led to increased coastal erosion elsewhere along the coast.

The discussions with the stakeholders revealed that development and integration of base line data, for example on coastal erosion, salinization and urbanization, are key to start understanding the complex relations that define sustainability of the delta system.

According to Van Veelen a key challenge is to develop a plan in which both conservancy and development are balanced and that is integrated within the traditional governance structures.

This news item was originally published on the websites of TU Delft Waterviewer and Delta Alliance (a report on the workshops).