Royal Boskalis Westminster has been awarded a land reclamation contract by KSO Ciputra Yasmin to construct five artificial islands for a new waterfront off the coast of the city Makassar, Indonesia. 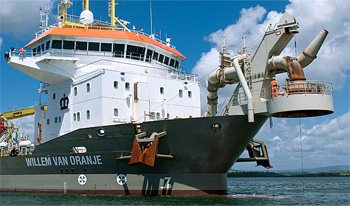 Deployment of mega hopper
Approximately 75 hectares of land will be reclaimed using 9 million cubic meters of sand sourced from offshore borrow areas. The islands will be protected by rock revetments.

Work is scheduled to commence in the coming months and will last two years. Boskalis will deploy a mega trailing suction hopper dredger for the reclamation activities.

New waterfront
The construction of the five islands marks the first phase of a prestigious development by KSO Ciputra to provide high-quality waterfront land for both residential and commercial use.

This land reclamation project is driven by the necessity to create land to accommodate population growth in a densely populated region.