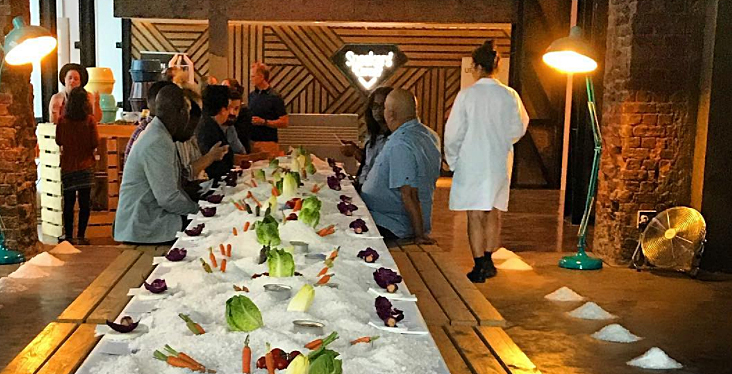 The initiative, known as S/Zout, features food products that emerge from a collaboration between Studio H and Salt Farm Texel, a Netherlands-based enterprise that grows salt-tolerant potatoes, carrots, onions, lettuce, cabbage and barley. 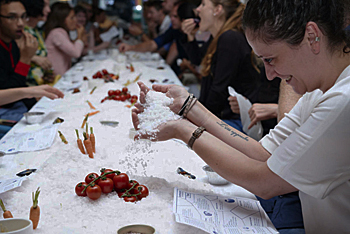 Two dinners in Cape Town with fruits and vegetables grown on 'zero water'.

Salty ocean water
The disastrous shortage of water in Cape Town has spurred the group of designers to imagine a future in which the salty waters of the ocean that borders the city might serve as source for cultivating food.

The designers of Studio H attended the Dutch Design Week in The Netherlands last year, where they invited visitors to sample ketchups, atchar, pickles and candies made with produce trucked in from Texel, the Netherlands.

Upon returning to Cape Town, they continued to conceive foods created with a minimum of fresh water. 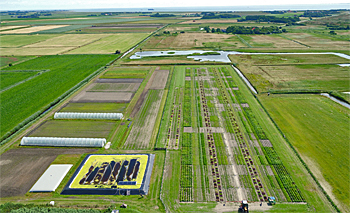 Day zero
South Africa suffers from persistent drought and that levels in the fresh water reservoirs have dropped to an all-time low. It is predicted that Cape Town – with 4 million residents and much industry - will run dry in early April. In the media it is speculated that ‘Day zero’ is unavoidable.

Households are only allowed to flush their toilet once a day and farmers are not allowed to irrigate their crops.

Conversations on water crises
‘At the moment, we’re very much focused on water’, said Hannerie Visser, founder of Studio H on the occasion of the two special evening diners.

‘We’re running the pantry on a speculative basis, but it’s a fantastic springboard for us to start a conversation about challenges in the food system and to approach the water crisis from the standpoint of a solution.’

The studio plans to open a pop-up shop that will sell foods from the S/Zout Pantry. 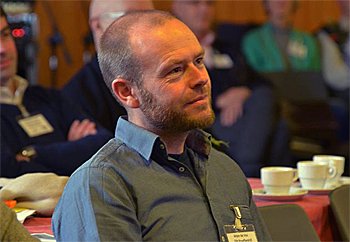 Training of farmers
Scientist Arjen de Vos of Salt Farm Texel believes that salt grown vegetables can help South Africa to combat drought. 'If you only count on fresh water, you are likely to run out of water. But that is not the case if you can take brackish water as a resource.'

In the Netherlands there is still enough fresh water to grow vegetables, De Vos continues. 'In other countries, like South Africa, fresh water resources are shrinking rapidly. So we take the knowledge and expertise that we gather here at the Salt Farm Texel regularly abroad.

De Vos: 'We have many projects abroad, where we train local people and help small-scale farmers produce food in salty conditions. We have been to Bangladesh and in Pakistan we have just finished training farmers.’

About Studio H
Studio H is a group of culinary-minded experience designers, specialised in creating multi-sensory experiences. It organises wedding days, as well as farmer's markets to cater for special events.

The farm works together with NGO's, breeders and farmers across the world, in evaluating the salt tolerance of conventional crops and halophytes, performing large-scale screening of possible salt tolerant cultivars, and developing saline agricultural practices.

This news item is based on articles published on the websites of Quartz Africa, Studio H and Salt Farm Texel (Dutch only).

Introduction video on the Salt Farm Texel demonstration location in the Netherlands.