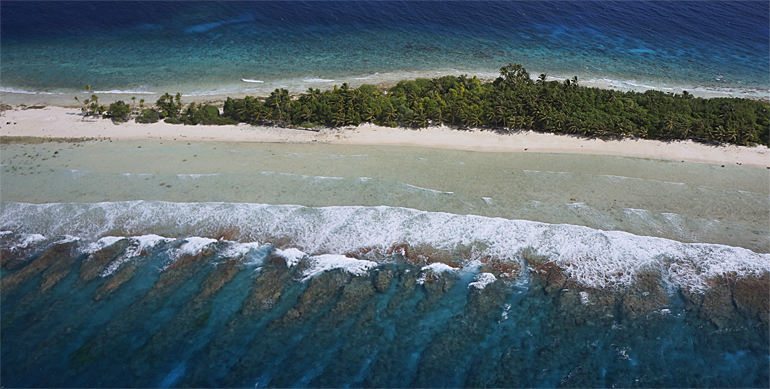 International scientists have developed a computer simulation tool to predict short-term flood hazards on coral-reef-lined coasts and to assess longer-term impacts from climate change. The tool is called Bayesian Estimator of Wave Attack in Reef Environments for predicting flooding (BEWARE) and can be used to understand the flood risks for low lying ocean islands that are often surrounded by coral reefs.

Scientists from Deltares, the US Geological Survey, and Delft University of Technology published an article about this tool in this month’s edition of the Journal of Geophysical Research: Oceans. 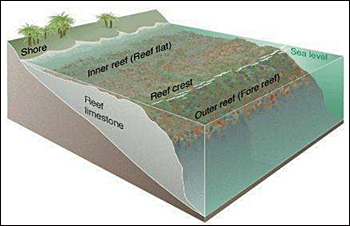 Different zones of a coral reef.

Damage to reefs
Hurricanes Harvey, Irma, Jose, and Maria became household names this fall as they tore a path of destruction through the Caribbean and southern United States.

The waves generated by such hurricanes or cyclones can have devastating effects on tropical island coasts fronted by coral reefs.

Many of these islands are low-lying (less than 3 m above mean sea level), with their freshwater in thin, fragile aquifers just beneath the surface of the ground.

This makes residents of such coastal areas extremely vulnerable to sea-level rise and flooding caused by waves, which can threaten their food and water supply, public health, and critical infrastructure.

Width variety of reefs
It is not easy to predict the flooding of coral-reef-lined coasts as there is a wide variety in physical structures.

According to lead author Stuart Pearson from Deltares and Delft University of Technology, the wave and sea level conditions vary significantly in space and time.

‘For many locations, there are little to no data available regarding these factors’, Pearson said. ‘The task of coastal flood prediction is made even more difficult by the complex changes that waves undergo as they move across coral reefs and approach the shore.’

Tackling the problem
The Beware-tool can be of help in regions with poor data availability as it can generate an artificial database of wave conditions on coral reefs using the physics-based XBeach Non-Hydrostatic wave model.

This database is open-access and downloadable from the U.S. Geological Survey (USGS) database catalogue. Also look on the XBeach Open Source Community.

These data are compiled in a statistical Bayesian network model that enables the kind of fast predictions needed to power early warning systems for coastal flooding.

The Beware-tool will give input to estimate societal or economic risk and damage from such flooding. The tool can be used to play “what-if” games and ask questions such as, “how will flood risk change if the coral on this reef dies, or if sea level rises by more than 1 meter?”