The announcement was made at the Singapore International Water Week on 12 July.

Forward osmosis is a membrane separation process which takes advantage of a pressure gradient that is created by a high solute concentrated ‘draw’ solution. 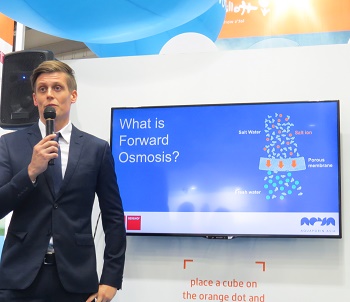 Mark Perry of Aquaporin explains the priniciples of forward osmosis.

Best of two worlds
Te Lintelo and Perry made clear that the combination meets the best of two worlds by utilizing the inherent low-fouling properties of the tubular membrane geometry for the development of forward osmosis modules.

The two companies believe that they will be able to provide a cheaper solution for treating industrial process streams and waste water.

This accounts of the fact that the filtering channel is completely open, making it possible to handle a large quantity of suspended solids.

Filtration occurs from the inside to the outside of the channel and it is possible to perform backwash operations. 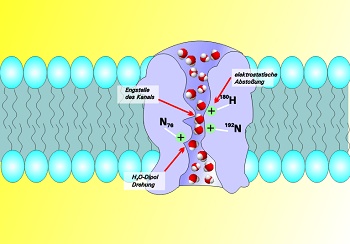 Schematic depiction of water movement through the aquaporin channel

Thin film coating with proteins
The Aquaporin Inside technology is a thin film coating that hosts proteins in an environment that retains the molecules' natural activity of moving water molecules.

The coating can be applied to both flat-sheet membranes and hollow fiber modules.

The protein is selective for transporting pure water molecules because of the hydrophobic nature of the aquaporin's water channel.

Ongoing r&d project on forward osmosis
With a grant from the Singapore national research foundation, Aquaporin started a 3-year r&d project in 2014. The company embarked on the development of biomimetic forward osmosis membranes from lab scale to pilot production and industrial test bedding of modules.

The end goal of the project is to demonstrate the cost saving potential of Aquaporin’s coating Inside forward osmosis technology through industrial test bedding. 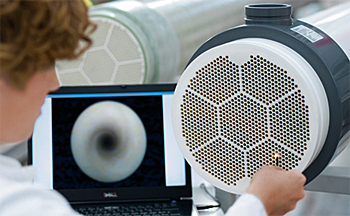 The membranes are manufactured in fully automated high-tech production lines, which enables a high quality and competitive products.

With experience developed over 50 years, Berghof Membranes is a specialist for filtration and separation of industrial process streams and wastewater.

About Aquaporin
Aquaporin Asia was incorporated in Singapore in early 2011 as a Singapore-based joint venture between the Danish company Aquaporin A/S, Nanyang Technological University and DHI Singapore.