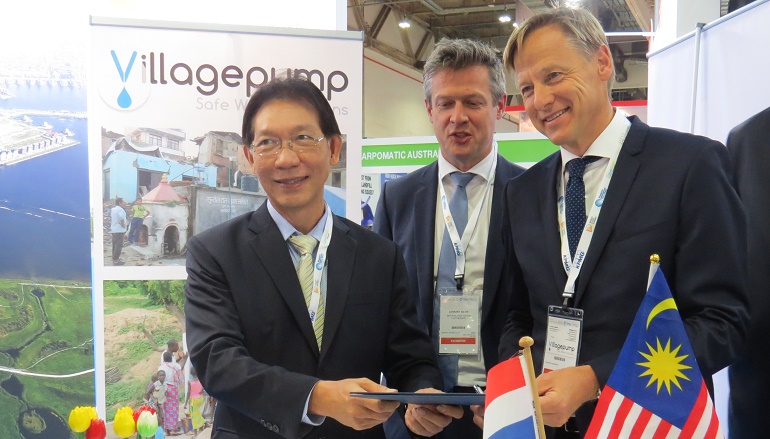 Dutch-based Villagepump and Malaysia-based Weida signed a Memorandum of Understanding (MoU) to come to a licensing agreement for Weida to manufacture the VP500 Villagepump for the Asian-region.

The MoU between Villagepump and Weida was signed at the Netherlands water pavilion during the Singapore International Water Week on 11 July.

The villagepump combines the traditional hand-pump with a self-flushing suction filter, an automatically back-washed ultrafiltration membrane and – optional - an active carbon filter for the removal particle and waterborne pathogenes. The VP500 version can produce up to 500 litre drinking water per hour. 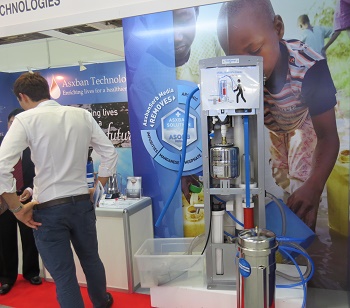 Villagepump displayed at the Singapore International Water Week by Asxban that developed a version for the removal of arsenic and fluoride.

Without using energy and chemicals it can deliver drinking water that meets the WHO-standards from any fresh water source, including ponds, lakes and streams.

If used for immediate disaster-relief a unit can be operational within 30 minutes after arrival on location.

Presently, the Villagepump is operational in more than 20 countries, including Bangladesh, India, Indonesia, Malaysia and Nepal (emergency relief).

The technology has been tested by National University of Singapore (NUS) and is under certification by TüV-Süd Singapore. 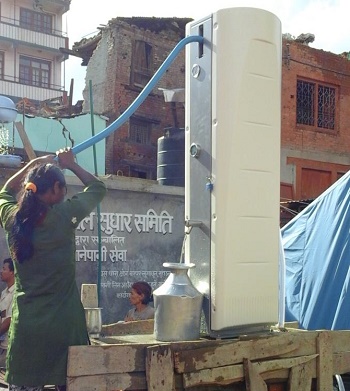 Production facility in Malaysia
Villagepump is about to license the production of its VP500 version to Weida in Malaysia. Weida is a manufacturer of polyethylene products for the construction industry, including waste water treatment plants.

The company has 12 offices in Malaysia and the Philippines.

According to Joost de Waard at Villagepump a production facility in Malaysia brings the VP500 closer to the huge Asian market. Local production will significantly lower the sales price, shorten delivery-time and provide local jobs.

“This year we will be producing 200 Villagepumps. We expect this to increase to 500 in the near future”, De Waard told. “We expect several thousand devices to be sold in Malaysia and Indonesia.”

The Malaysian government aims to have 99 percent of its rural population to be served with clean water by 2020. This year the government allocated a budget of RM568 million for 3,000 houses.

Watch the video for an impression of a Villagepump in Mae Jo-Chiang Mai province, Thailand.