What are you looking for?
News 4 September 2015 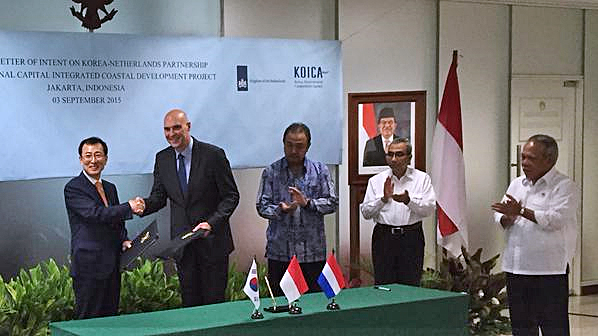 South Korea, the Netherlands and Indonesia signed a letter of intent for a study on a joint realisation of the National Capital Integrated Coastal Development (NCICD), also known as the 'Giant Sea Wall' project.

Indonesia and the Netherlands have already done several joint studies and now South Korea has joined as a third party in this Jakarta flood protection plan.

A letter of intent was signed in Jakarta on 3 September by vice president Choi Sung Ho (left on top photo) of the Korean International Cooperation Agency (KOICA), deputy minister Lucky Eko Wuryanto (middle) of infrastructure at the Coordinating Ministry of Economic Affairs, and deputy head of mission Ferdinand Lahnstein (third left) of the Dutch embassy in Indonesia. 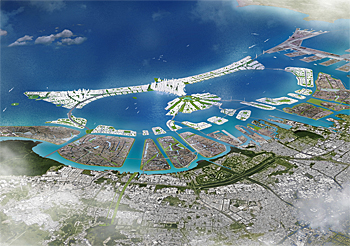 The NCICD-plan envisions to solve Jakarta's big water problems and combine it with an ambitious development programme. Dutch architects designed the new urban development in the shape of a Garuda.

Based on the outcome of the study the three countries are expected to make a final decision on the start of second and third phase of the mega project.

The new study is expected to be ready in six month.

Both South Korea and the Netherlands pledged to set aside 8 million US dollar in grants to cover the costs, including additional research on undersea currents and soil structure off the coast of Jakarta as well as other follow-up studies . 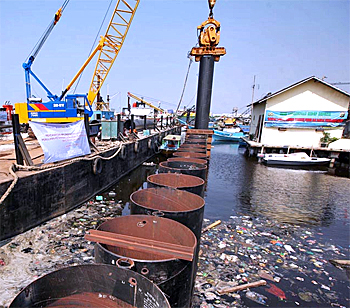 The first work on the NCICD-plan started in October 2014 with the enforcement of the existing flood wall.

First phase already started
The realisation of the first phase of the NCICD-plan already started in October last year and concerns the enforcement and lifting of the existing flood wall along Jakarta's coastline.

The second and third phase of the plan concerns a 40 billion US dollar megadevelopment project that is to turn the city in a more prestigious metropolis.

The next phases of the NCICD-plan foresee a big 32 km long sea wall in the bay of Jakarta that creates an inner lake.

This inner lake will enhance flood prevention - extreme high tides as sea - and can act as a retention basin - extreme river discharge.

The inner lake also allows new urban development on reclamation islands, a new port and new motorways to decongest the current traffic in the city.

Draft version
Dutch and Indonesian experts have been working on the details of the NCICD-plan since 2008, involving a Dutch consortium headed by consultancy firms Grontmij, Witteveen+Bos with subconsultants Dutch research centre Deltares, architecture firm KuiperCompagnons and consultancy firm Ecorys.