What are you looking for?
News 7 September 2018

Stockholm World Water Week 2018: A look back on an inspiring event to get SDG6 on track 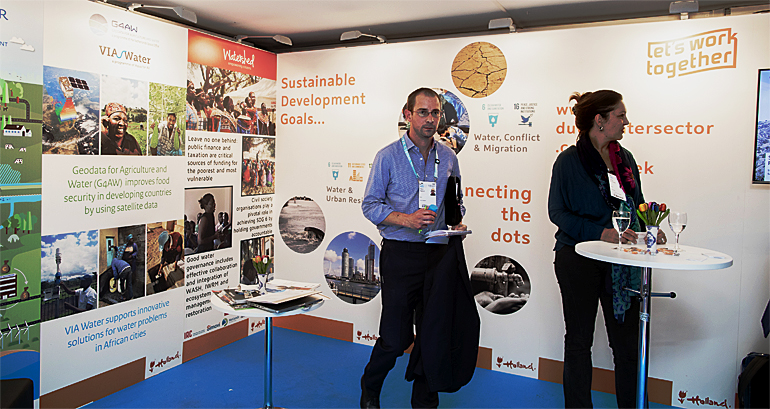 ‘Water scarcity has become the new normal’, said Torgny Holmgren of the hosting organisation SIWI at the start of the Stockholm World Water Week. He referred to recent water crises in many large cities such as Cape Town but also to the hot and dry summer in most parts of Europe, including Sweden. 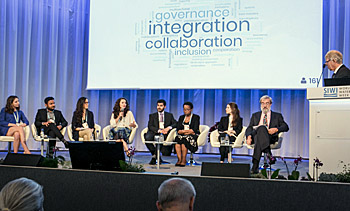 People attending the closing session had two words on their minds - integration and collaboration - when asked about their main take-away from the Stockholm World Water Week. (photo: SIWI)

Glass half full
Holmgren closed the water week optimistically. ‘We have a lot of work to do but after this week I feel the glass is half full, not half empty’, he said.

Holmgren’s remark gave voice to the growing awareness within the global water community gathered in Stockholm that there is no way denying the fact that water will be become more scarce due to climate change, population growth, increasing economic wealth and urbanization.

The protection of fresh water sources and the allocation of the water to the many users, were key issues at the 250 plus sessions.

The Stockholm World Water Week took place from 26 to 31 August and was attended by 3,300 experts from 130 different countries. 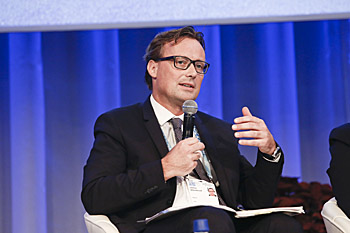 At the closing session Stefan Uhlenbrook, coordinator of the UN SDG6 Synthesis report, told that at the current pace only 1 out of 5 countries will achieve SDG6 by 2030 for drinking water, and only 1 out of 10 for sanitation. (photo: SIWI)

Off track
In June the United Nations published a report about the progress of SDG6 on water. The report concludes that the current pace of progress is insufficient to reach the global water goals by 2030. The report indicated that still 800 million people lack access to basic drinking water and 2.3 billion people lack access to safe drinking water.

The global water community showed the ambition to speed up the progress but also recognized the complexity and local specifics of water issues.

Scaling up
One of the ways to speed up is to forge partnerships, as was urged by Vice General Secretary of the United Nations, Amina Mohammed in her opening key note.

The Dutch delegation presented several international partnerships that are specially intended to scale up the effort by the water sector to reach the goals of SDG6 on water by 2030.

Good examples of partnerships
Examples were the special session by the Water, Peace and Security partnership that focusses on the prevention of conflicts caused by water scarcity.

On the issue of blending private and public finance the Kenya Innovative Finance Facility for Water (KIFFWA) was mentioned to help water projects in Kenya to come to a financial close.

The Finish partnership drew attention by signing a MoU with Water.org that joins in the worldwide roll out of the Finish concept. The concept supports finance facilities for the whole sanitation supply chain in developing countries, from household to the distributors of compost that is made from faeces.

A new Dutch programme, the Blue Deal aims to help 20 million people in 40 catchment areas around the world to gain access to clean, sufficient and safe water. On several occasions during the water week, the programme was presented. Its goal is to establish long-term partnerships with peer-to-peer learning to strengthen the local water management.

Below a selection of photos, giving an impression of the event and Dutch related contributions. 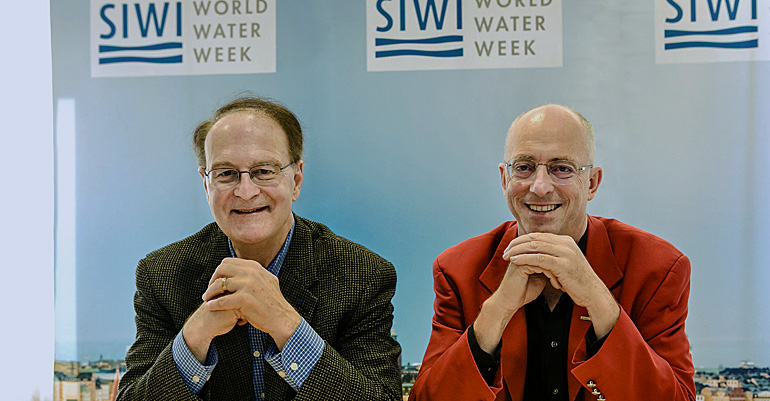 Winners of this year's Stockholm Water Prize, professors Bruce Rittmann (left) and Mark van Loosdrecht (right) react very modest on the appraisal by the jury they had ‘revolutionized the treatment of waste water’. The microbes do all the work, we only try to understand how they do it’, say the two famous environmental bioengineers. (photo: SIWI)

'Mistreatment of water to become a taboo' 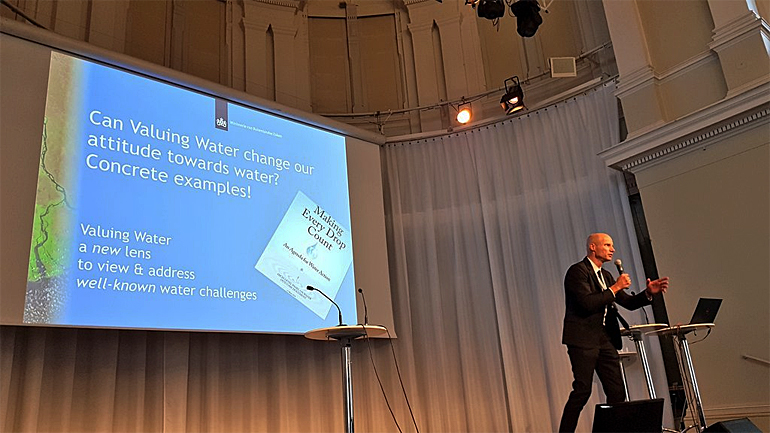 Dutch water envoy Henk Ovink takes the lead in a session on valuing water. Last year the principles of valuing water were launched at the Stockholm World Water Week. This year Ovink showed that there is more to the prizing of water than just cost recovery. The real price of water also includes social, cultural and environmental values. ‘By 2030 the mistreatment of water and destruction of its value has become a taboo’, Ovink predicts. 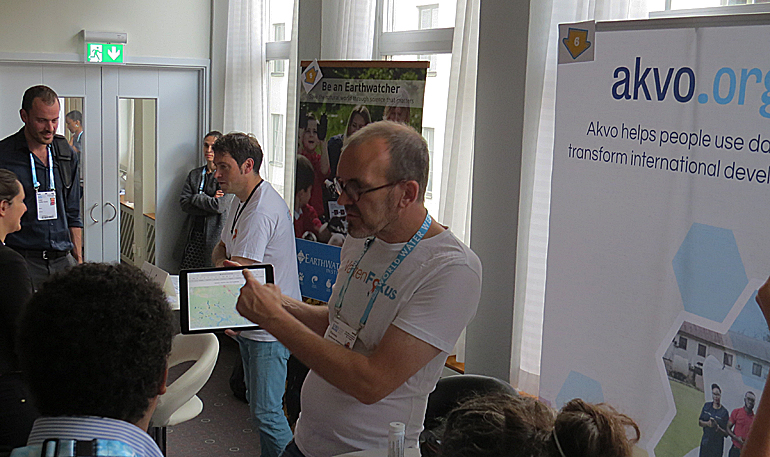 Swedish co-founder of Akvo, Thomas Bjelkeman, explains how Swedish citizens are involved in meassuring the quality of Swedish surface water. The Swedish water authorities lack the money to monitor all lakes, so Akvo provides citizens with simple monotoring equipment and collects the data in a central database. The presentation is part of a session organized by the EU citizen observatory programme Ground Truth 2.0, led by IHE Delft, on community-based environmental monitoring that brings together authorities, researchers and citizens and co-create new knowledge.

Junior Water Prize: a battery of water and salt

High school student Centaine Du Toy van Hees shows the Blue battery as this year´s Dutch entry for the Junior Water Prize. Du Toy van Hees has been involved in the development of a new membrane for the battery that can store energy just on water and salt. The winners of the prize were Caleb Liow Jia Le and Johnny Xiao Hong Yu from Singapore who developed a way to produce reduced grapheme oxide, which can purify water. They are sitting in the back of the picture (with red jackets).

One minute pitches by young entrepreneurs

Mexican entrepeneur, César Maldonado is one of the two winners of the one-minute sales pitch competition, organized by the Water Youth Network in the Netherlands Pavilion. He gets a high score from the jury. The jury had a hard time to figure out the relevance of the presented ideas. Maldonado’s idea is a septic tank using a vermifiltration so the sewage water losses its bad smell. 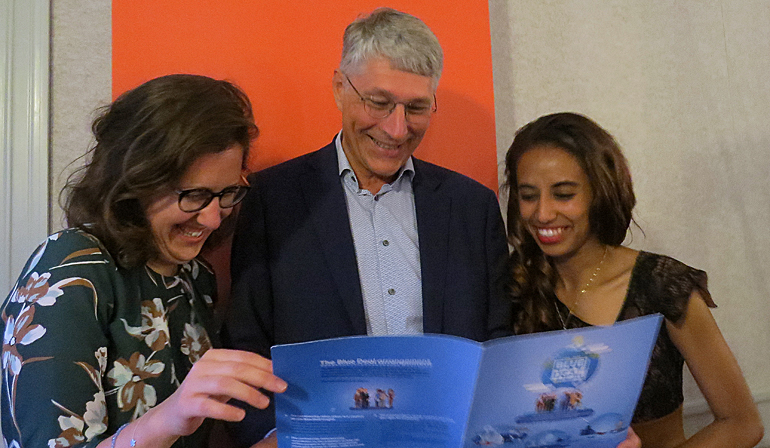 Vice Chairman Hein Pieper of Dutch Water Authorities shows the new brochure on the Blue Deal programme to Marijn Korndewal (left) and Kidist Ketema Bekele (right). Dutch Korndewal and Ethiopian Bekele work peer-to-peer for the Awash River Basin Authority. As part of the Blue Deal programme all three are involved in the preparation of a long-term partnership to strengthen the water management in this river basin. Blue Deal’s first partnerships will officially be announced in March 2019. 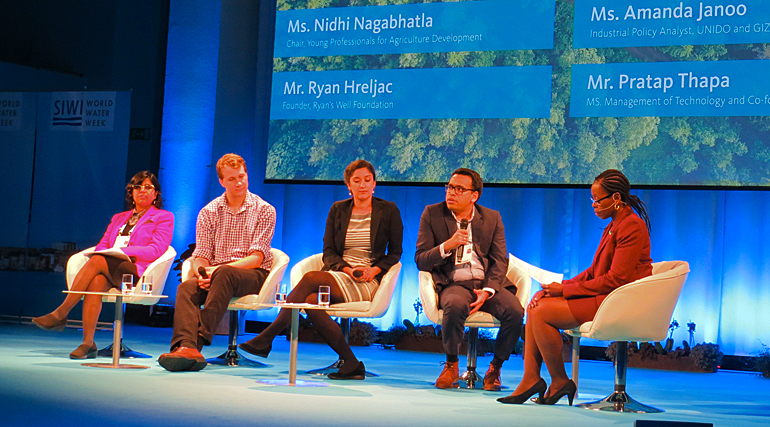 At the opening session, young entrepreneur Pratap Thapa (second right) tells about the hydro-powered irrigation pump he invented as a student at the Wageningen University. He started the company aQysta that is now based in Nepal. With 150 units sold world wide, the start-up is a success story. Thapa takes the opportunity to warn donors in the global water sector to be careful with free aid as it can easily undermine a local market for small entrepreneurs.

Wilhemina Malima (right) of the Water Supply and Sanitation Collaborative Council (WSSCC) welcomes the release of the report Global Review of National Accountability Mechanisms for SDG6. The first global review, involving 25 countries, was presented by Erma Uytewaal (left) and Catarina Fonseca (middle) of IRC Wash at the Netherlands Pavilion. The report reviews on the collection of independent data to see whether governments are on track to achieve SDG6. ‘The report has already opened people's eyes in Tanzania and initiated the conversation on the issue of accountability’, assured Malima.

Leaving no one behind 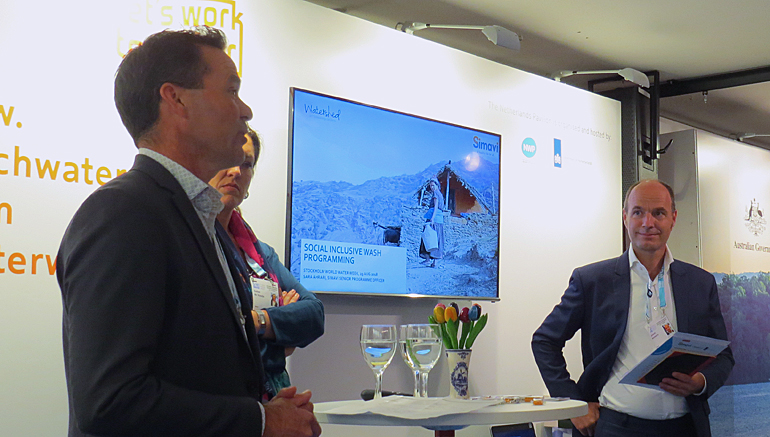 The main theme of this year’s water week was nature based solutions but some events preluded already on next year’s theme: Leaving no one behind. At the Netherlands Pavilion Simavi programme director Esther de Vreede (middle) and Jeroom Remmers (right) hand over the report Social inclusive WASH programming to senior water officer Pim van der Male (left) of the Dutch Ministry of Foreign Affairs. Van der Male assured that access to water service for minority groups and vulnerable people is already high on the agenda of the Netherlands foreign water policy but welcomed the findings to bring the discussion forward.

The next Stockholm World Water Week will be held in the Tele2 Arena from 25-30 August 2019.