Study: Water pollution will cause most victims in future global hotspots 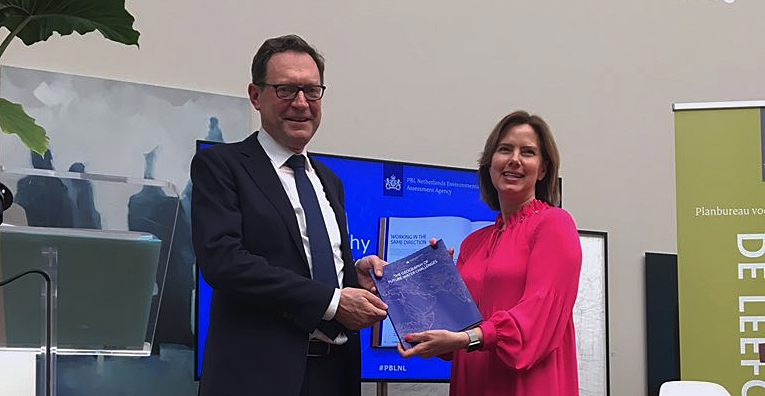 Population growth, economic development, urbanisation and climate change will have a big impact on water issues by 2050. The Netherlands Environmental Assessment Agency (PBL) made an assessment of the future impact of too little, too much and too polluted water worldwide and located the hotspots where the problems will accumulate most.

Remarkably the report showed that water pollution will cause most victims, mainly from diarrhoea and cholera. Some 780.000 people die annually from drinking polluted water, compared to 1,100 from drought, 6,000 from floods.

The PBL study ‘The Geography of Future Water Challenges’ was presented to Dutch Minister of Infrastructure and Water Management Cora van Nieuwenhuizen by PBL director Hans Mommaas in The Hague, the Netherlands on 19 April. 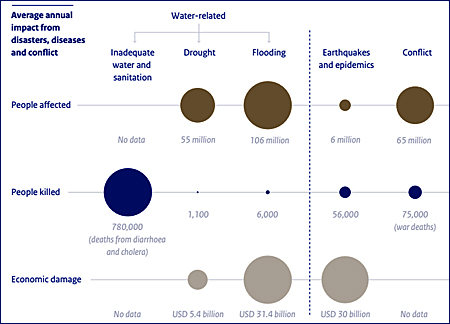 One of the many graphics in the PBL study that clearly shows that water pollution has by far the hihgest death toll of all disasters, diseases and conflicts.

Silent killer
Water pollution seldom reaches the news headlines. It is a silent killer. The study indicates progress as access to clean drinking water and treatment of sewage water is improving worldwide.

However, based on the current business-as-usual, it can be expected that in hotspot areas, rural areas and in slums, the situation will deteriorate as more people are expected to move to cities, mainly ending up informal settlements without access to any facilities.

Global hotspots
PBL captured many previous studies on global water issues related to climate change. By combining the data on the three main themes (too little, too much, too dirty) and putting them on the global map, it gives an insight in the hotspots where, by 2050, the water challenges will be huge.

The study shows that drought will mostly affect India, China and Western Africa. Floods will occur everywhere but again China and India will suffer the most. Three hotspots related to dirty water, are Nigeria, DR Congo and again India. 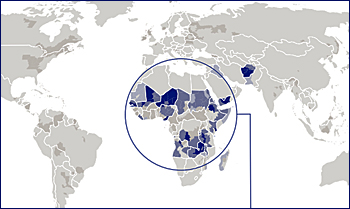 One of the hotspots is the sub-Saharan dryland region. In combination with population growth, many young adults and low income, the region stands out in its high potential of migration.

Four typical landscapes
In addition to available studies, PBL defined four different landscapes where the water problems occur in the same circumstance and where the solutions will be the same, disregarding the location:
● Drylands and water-stressed areas
● Cities
● Transboundary river basins
● Coastal zones and deltas
In these landscapes the pathways to climate adaptation are very similar and can be mainstreamed, rather than traditionally by national or district boarders, PBL believes.

Wicked problems: dams
The study shows that improved water management can increase agricultural production by over 40 percent, in parts of Sub-Saharan Africa, Central Asia and the Middle East, among other areas.

Four hotspots where many new dams are planned for the production of  hydropower: Amazon, Congo and Himalayan river basins.

In his introduction during the presentation of the study, PBL-director Hans Mommaas specifically mentioned the current plans for new 3,700 dams, many of which in the Amazone, Congo, Yangtze and Himalayan basins.

‘This is one of the wicked problems´, he said. ´With the dams that are currently planned, hydropower will increase by 80 percent. However, it will not only have great impact on the river systems and the people living near those rivers, it will also lead to less sedimentation in the river deltas and eventually will cause coastal erosion´, Mommaas said.

One way to make the dams more ecologically friendly is to build smaller dams with smaller reservoirs. ´However, this substantially reduces the electricity production´, Mommaas warned.

Download the full study (as a pfd, 29 mB): The Geography of the future water challenges.