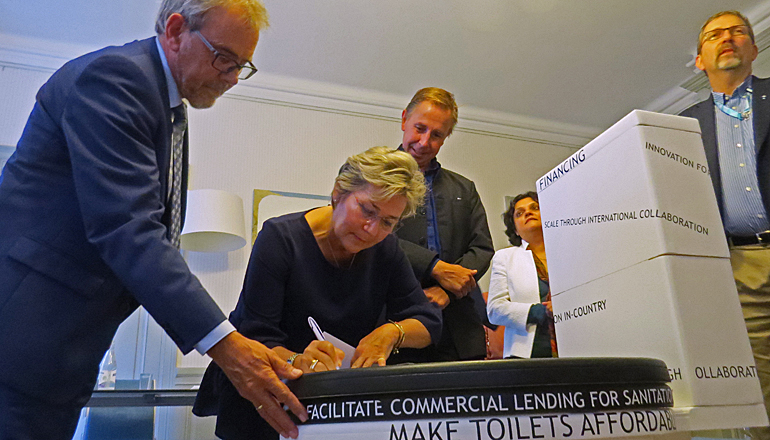 Non-governmental organisations Water.org and Waste signed a Memorandum of Understanding (MoU) to work more closely together on the Finish Mondial concept, creating commercial lending facilities for both households, as well as suppliers in the whole supply chain for cheap toilet.

Both organisations consider themselves complimentary as Water.org is successful in offering micro-finance for poor households and Waste is successful in facilitating loans to institutions and households that build toilets or deliver services such as the emptying of pit latrines. 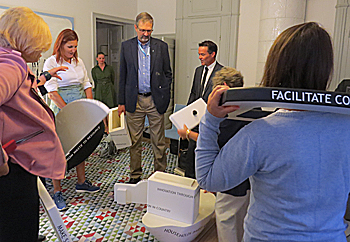 Representatives of the involved organisations built a toilet that symbolised the unique selling points of the Finish concept,

‘We are thrilled to participate in Finish’, Lyons added. ‘Together we can unlock more commercial money for poor families to build a toilet, to improve their hygiene, and ultimately improve their health’.

Valentin Post of Waste: ‘We share the same ideas on making toilets affordable to poor households by the creation of a market. We both believe in commercial facilities so households can buy a toilet from their savings or by borrowing the money.’

Fully commercial
The signing ceremony included a presentation of the unique selling points of the concept of Financial Inclusion Improves Sanitation & Health (Finish). 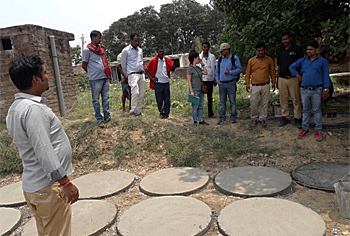 Team Finish in the North-eastern Indian village of Nawabganj telling the villagers the perils of open defecation, the root cause of all diseases. They appealed to the ward members and the village head to launch an awareness campaign on ODF (photo: Twitter Finish).

The concept addresses the full supply chain by creating a market for households to purchase a toilet (on the demand side) and for entrepreneurs to start a business (on the supply side) in building toilets or to provide services to collect the faeces for the recovery of fertilizer and biogas.

Unusual about the concept is that it is fully commercial and not driven by standalone sanitation projects that are financed by donor organisations.

Cheaper toilets
The Finish concept was launched by Dutch non-governmental organisations Waste and Aqua For All in India in 2008. Amref joined in 2013 when the concept was introduced in Kenya. Today, 700.000 toilets have been built, providing 4.2 million working days for construction companies. Since its start, Finish can now offer toilets that are one-third less costly to construct because cheaper materials are used, dimensions have been optimized and local masons have been trained in construction..

Following the quick set up of the supply chain in India and Kenya, Waste now focuses on replication of the partnership model in Uganda, Ethiopia, Tanzania and Bangladesh. Ultimately, the partners want to operationalize the concept worldwide.