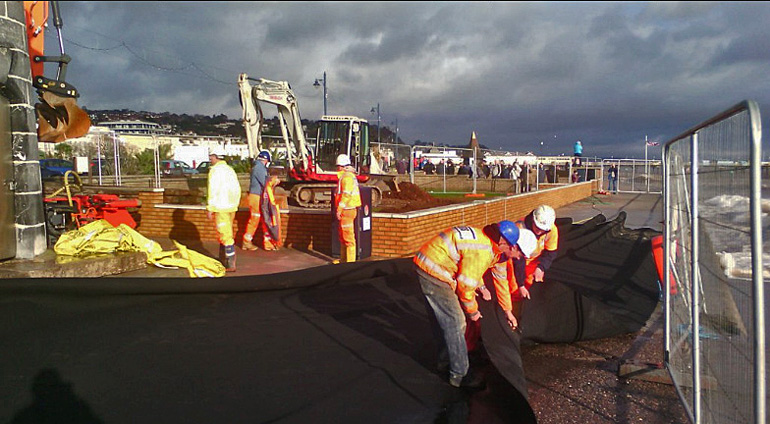 The Environmental Agency confirmed that repairs to the Teignmouth's seawall were finished within three months after storm Frank hit the coastal town on the south west coast of England.

The agency worked with Teignbridge District Council and contractors Team Van Oord to secure the seawall for the future.

Conditions during the repair work were challenging, with continued storms, bad weather, and access for machinery only possible on the low tides around spring tides. 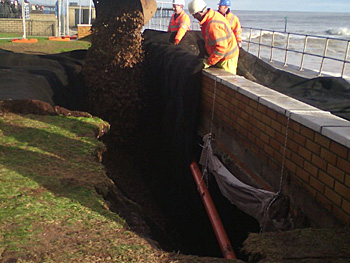 Following the repair of the sea wall, a geotextile liner was put in place and the hole could be filled with soil again.

Instability of the wall
Teignmouth was hit by storm Frank on 28 December last year. A break in the sea wall allowed tonnes of material to be sucked out from under the promenade and after a few days a 2m deep sink hole appeared.

As waves continued to lash the seafront, immediately after the storm, work began on an emergency repair.

It was essential to carry out these repairs quickly as the instability of the wall and promenade threatened increased flood risk to homes and possible safety risks for the public.

Night work
Environment Agency staff were only able to work on the beach for a few hours at a time, for a few days at a time, and often had to work during the night.

Thom Buxton-Smith, for the Environment Agency, said: "Despite these challenges we worked with Team Van Oord to complete the repairs quickly. The voids have been filled beneath the promenade, slipway and car park. We have repaired the limestone masonry sea wall and installed steel sheet piling at the base of the wall to stabilise it"

This news item was originally published on the official website of the UK government.