Vietnam is building its longest sea-crossing bridge, the Lach Huyen bridge, near the city of Haipong. For its construction, two land reclamation strips have been created that serve as works platforms. The platforms have been constructed using TenCate's Geosynthetics.

Construction of the 4.1 km long works platforms was recently completed.

The 5.44 km long bridge, is set to open in February 2017 and will link Haiphong and capital city Hanoi to the new deep sea Lach Huyen port. 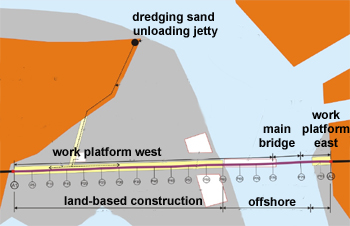 Two works platforms (yellow) have been constructed on each side of the bay.

Deep sea port and motorway
Off the coast near its capital city Hanoi, Vietnam is involved in a massive infrastructure project that involves the building of a new deep sea port and a motorway.

Part of the motorway, that is to connect the new port to Hanoi, is the sea-crossing Lach Huyen bridge that will be 5,4 km long with 84 spans supported by piers.

The bridge will cross the estuaries of the rivers Bach Dang and Cam. It will also span a 500 m wide navigational channel.

The bridge is under construction since 2014 by a Vietnamese-Japanese consortium. 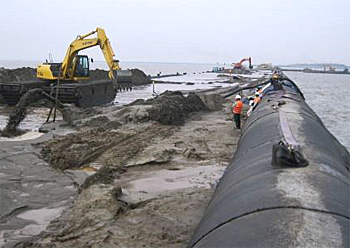 Construction on dry land
For installation of foundation piles, construction of bridge piers and launching of bridge sections, heavy machinery is used. Two main restraining factors in the bay area are the soft ground and tidal conditions.

To allow the bridge construction to be carried out on dry land, two works platforms were made on each side of the bay.

The platforms were reclaimed along the alignment of the bridge, having a width of 26 m and 3.9 km in total length.

Stacked geotubes
About 27 km of TenCate geotextile tubes were used as reclamation bund, segmentally stacked up to 5 layers high over intertidal soft clay deposits for the construction of the platforms. 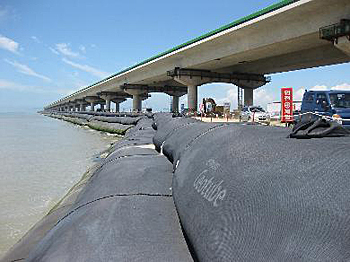 A similar works platform was realised with Geotubes under the Incheon Grand Bridge, Korea in 2006.

Each tube is 50 metres in length and varying in diameter from 4.6 to 9.5 metres. No less than 500,000 cubic metres of sand was needed for building the works platforms.

In 2006 TenCate was involved in a similar project with Geotubes for the construction of the sea-crossing Incheon Grand Bridge, that connects the new international airport of Seoul to Incheon city, South Korea.

This item was originally published in the Summer 2015 edition of TenCates corporate magazine Txture.

TenCate Geotube and GeoContainer provide infrastructure solutions to construct roads and bridges , regaining land from the sea or creating land.