Tidal Bridge, a joint venture of Strukton International and DEC, has started the feasibility study for the Palmerah Tidal Bridge project in Indonesia.

The first scope of the project consists of the construction of a 800 m floating bridge to cross the Larantuka Strait connecting the islands of Flores and Andonara.

Additionally the bridge is to include a tidal energy power plant with a capacity of 18 to 23 MW. 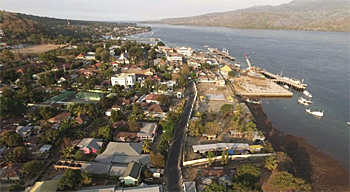 Cutting edge technology
Eric van den Eijnden, CEO Tidal Bridge said: “We are proud to contribute to this bridge with cutting-edge technology and the largest tidal power plant in the world and in so doing be able to increase the living standard of the people.”

“This milestone is an extraordinary momentum to show our knowledge and experience”, said André Hoogeveen, General manager Strukton Sustainable Energy. “It is great to have the opportunity to contribute to this state of the art product in Indonesia.”

Great potential for tidal energy
The combination of the bridge with the tidal energy power plant makes this project unique in its kind. The planned location, Larantuka Strait, is highly suitable for the generation of tidal energy due to the water flows.

After realising the first phase, the project may be followed by an extension and finalisation of the power plants to an installed capacity of 90 MW to 115 MW for more than half a million people. 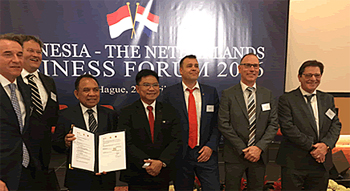 Tidal Bridge and Indonesian national and local authorities agreed on a roadmap to construct a bridge in April last year.

This news item was originally published on the websites of Tidal Bridge and Strukton.