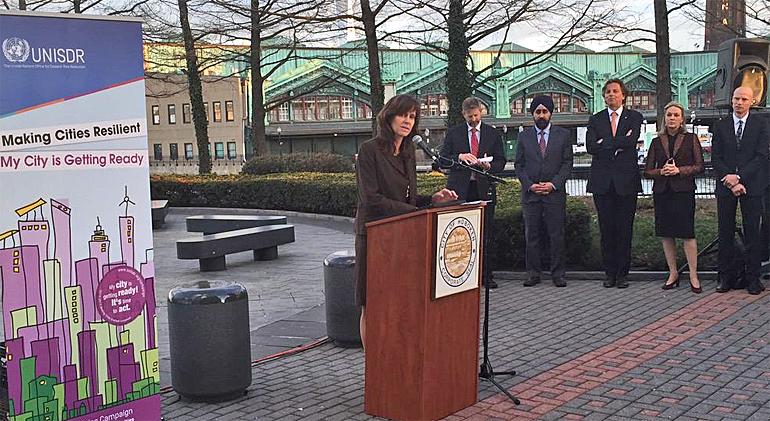 Representatives from the United Nations International Strategy for Disaster Reduction (UNISDR) honored the city of Hoboken, New Jersey, USA, as a Role model city as part of the nationwide Making Cities Resilient campaign.

The ceremony took place on Hoboken's west bank of the Hudson river on 28 April.

A Role model city certificate was handed over to Mayor Dawn Zimmer of Hoboken, in the presence of a large Dutch delegation, including minister Bert Koenders of Foreign affairs, as Hoboken's flood resilience plan was designed by two Dutch companies, architecture firm Office for Metropolitan Architecture (OMA) and consultancy firm Royal HaskoningDHV.

The certificate recognizes the comprehensive resiliency strategy of Hoboken, including the award-winning Rebuild by Design project. 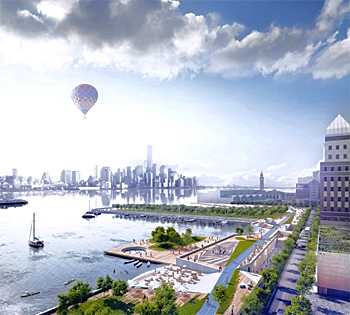 A Dutch oriented flood resilience plan with a water system based on resist, delay, store and discharge.

Rebuild by design competition
In 2012 hurricane Sandy caused a storm surge moving up the Hudson river and flooded 80 percent of the city of Hoboken and caused over 250 million USD in damage. The city of Hoboken realized it needed an innovative concept to prevent future flooding and make the city more resilient.

The city participated in the Rebuild by design competition and together with Dutch expertise by OMA and Royal HaskoningDHV a comprehensive plan was developed, including pumps, turning existing parks into water-containment basins, creating a green belt of parkland around Hoboken to soak up excess water.

The plan was developed in close cooperation between city planners, water experts and the community of Hoboken itself.

In June 2014 state secretary Shaun Donovan of housing announced the plan as one of the 6 winning design projects. It was awarded 250 million USD of federal funding for realisation.

The City of Hoboken is currently seeking to implement this project as a first phase of the strategy.

Protection fo the whole community
"For Hoboken, we need a solution that protects the whole community", said Mayor Dawn Zimmer of Hoboken. "OMA and Royal HaskoningDHV developed a comprehensive strategy for our city that improves the resiliency to flooding from both storm surges and rainfall events. We are very confident that their plan will prove to be successful!"

Marten Hillen, flood risk consultant at Royal HaskoningDHV said: "Our solution will have the greatest impact on these communities in helping them to become more resilient to future flooding. We are very proud to have co-developed this Resist-delay-store-discharge strategy and congratulate Hoboken for being designated a Role model city for its flood risk management practices." 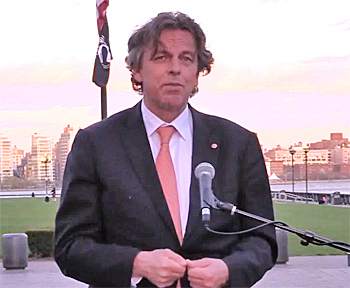 UN cities resilience campaign
Hoboken joined the UN’s Making Cities Resilient campaign in 2013. It’s now one of 45 cities worldwide to be considered by the UN as a role model, and only the second in the U.S. — the other is San Francisco.

There are over 2,400 cities and towns worldwide participating in the campaign, including 73 capital cities, representing a collective population of 700 million people,

In the Netherlands, the city of Dordrecht is a participant.