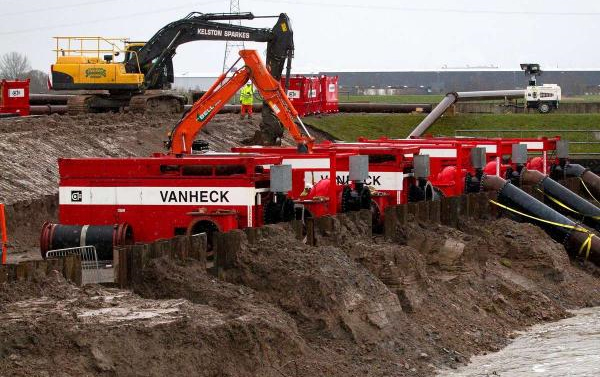 An impressive row of eight massive pumps from the Netherlands, form the heart of a new mobile pumping station that became operational near Dunball on 13 February.

The temporary station is pumping flood water from the King's Sedgemoor Drain into the river Parrett at a rate of 56,000 m3 every hour.

The Dutch firm Van Heck Group brought the equipment over from the Netherlands and managed to get the massive pumps operational in just a few days. Company director Jeroen van Heck said: "It has not been an easy job as we had to use high cranes to lift the pumps into place. For safety reasons, we had to stop work on a number of occasions." 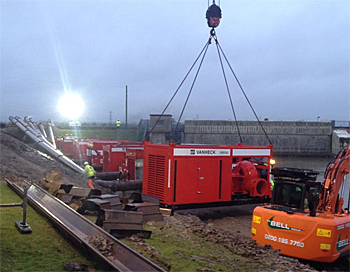 Further rain expected
With the new pumping capacity in place, Van Heck expects water levels in the flooded areas of the Somerset Levels to soon decrease.

"They will not have an immediate effect as further rain is expected. I expect it will take a few days before the reduction is really noticeable", he warned.

Managing the tide-lock
In addition to the extra pumping capacity, the new temporary pumping station enables the Environment Agency and Somerset County Council to continue their flood relief efforts, regardless of the tide on the river Parrett.

For weeks now the agency and council have been using additional pumping capacity to deflect flood water from the Levels back to the sea mainly via the river Parrett. However, strong tides on the sea create a tide-lock on the river. 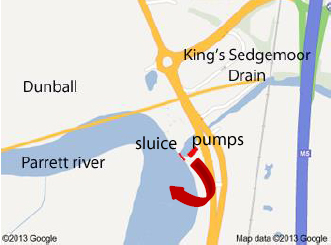 As a result, the water level on the river increases and the sluice gates have to be frequently closed in order to prevent water flooding into rather than out of the King's Sedgemoor Drain.

With the new temporary pumping station, the Environment Agency has managed to resolve the tide–lock issue and can now deflect the floodwater with interruption.

Van Heck currently has a total of 20 pumps in operation on the Somerset Levels. It is the biggest flood recovery operation in the history of the Dutch company.