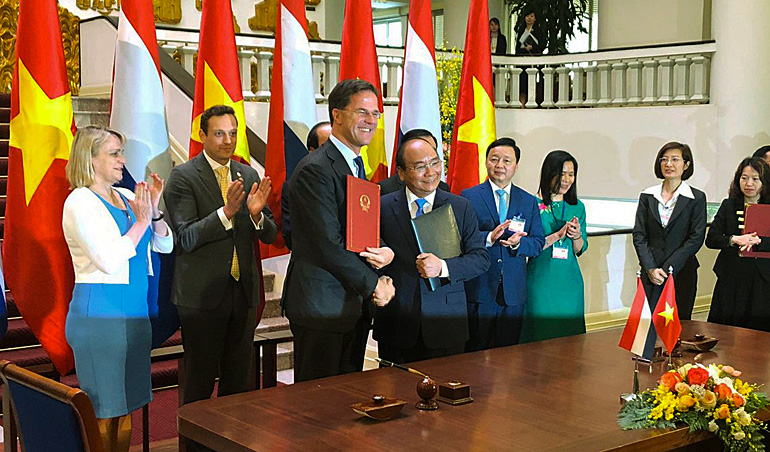 Vietnamese Prime Minister Nguyen Xuan Phuc and Dutch Prime Minister Mark Rutte signed a Memorandum of Understanding to deepen their cooperation in water management and food security, especially in the Mekong Delta. The MoU was signed in Hanoi on 9 April during a visit by Dutch Prime Minister Rutte to Vietnam. Rutte headed a delegation of Dutch ministers and Dutch companies with a focus on the agri- and horticulture, water, logistics and offshore wind energy. 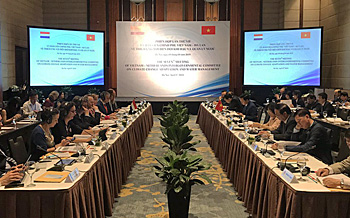 Strategic partnerships on water and food
The official visit highlights the growing economic relationship between Vietnam and the Netherlands, and follows up on bilateral agreements made in the past. In October 2010, both countries established a Strategic Partnership on climate change adaptation and water management. Both countries also established a Strategic Partnership on sustainable development and food security in June 2014.

In his opening speech Dung confirmed that the strategic partnership in climate change adaptation and water management continues to be a priority and an important pillar of Vietnam-Netherlands relations. 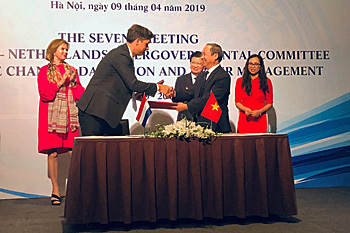 Minister Van Nieuwenhuizen offered Dutch support for the implementation of Vietnamese policies and the development of new policies.

She saw opportunities for support in water logistics, for example with inland waterways in the Mekong Delta and the modernisation of seaports and airports.

Integrated Mekong Master Plan
Consultancy firm Royal HaskoningDHV signed a contract with the Vietnamese Government to develop a spatial planning across different disciplines in the Mekong river delta to 2030, with a further view towards 2050.

Part of this future-focused plan will be a tool for digitalised decision-making. The tool will included a sophisticated database and analytical tools such as hydro-hydraulic modelling software. 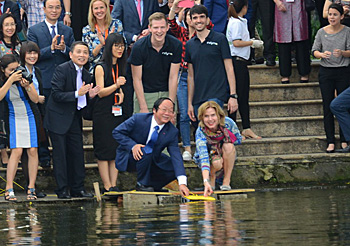 An important feature to support the decision-making process will be the transparent and visualised information for all stakeholders.

Over the next three years, two Dutch universities (Delft and Twente) and two Vietnamese universities (Hanoi and Thuy Loi) will support such training of Vietnamese water management professionals.

The education programme has a practical approach. For example, there will be a field lab where students can practice and test. There is also a lot of attention for high-tech applications such as drones.

More information
Ministry of Infrastructure and Water Management
The Hague, the Netherlands
+31 70 456 00 00
www.government.nl/issues/water-management