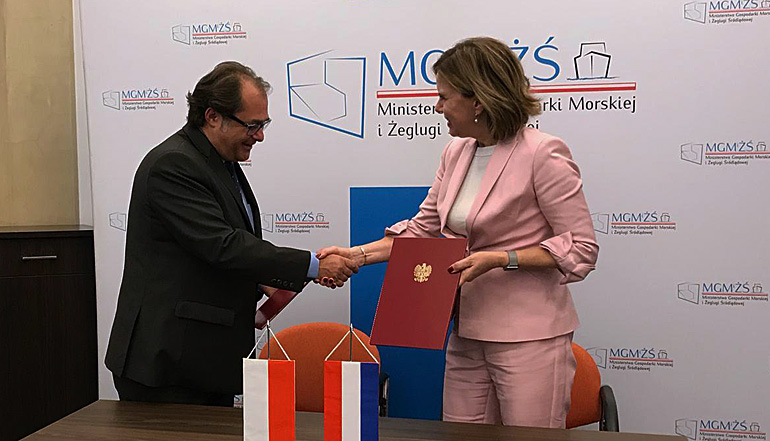 Poland is well advanced in its ambitious plans on climate resilient infrastructure. Next year all major large Polish cities must have an adaptation plan and by 2030 the country wants 30 percent of all its freight transport to go by rail or water. ‘That’s quite a challenge!’, said Dutch Minister Cora van Nieuwenhuizen of Infrastructure and Water Management who headed a Dutch trade mission to Poland from 9 to 11 October. ‘It’s an ambition my country recognises’, she continued. ‘We too, are a country of transport and logistics. Take our ports: Rotterdam and Amsterdam’.

On the occasion of the trade mission, Van Nieuwenhuizen (right on top photo) signed a Letter of Intent with the Polish Maritime Economy Minister Marek Gróbarczyk (left) on a closer cooperation in the field of water resources and inland water waterway transport.

Piotr Czarnocki of the Polish Environmental Ministry explained the common approach of all 44 cities in the 44MPA-programme on urban climate adaptation.

On the issue of urban climate adaptation the seminar showed the different approaches of both countries. Poland is well advanced on its programme Urban Adaptation Plans in 44 cities (Miejskie plany adaptacji - 44mpa). Head of unit climate adaptation Piotr Czarnocki of the Polish Ministry of Environment told that the programme is already in its fifth stage. This means that the cities have finished their assessments and are now in the process of defining projects, such as the creation of green-blue corridors.

Next year all 44 cities are to enter the sixth and final stage, the publication of the action plans. 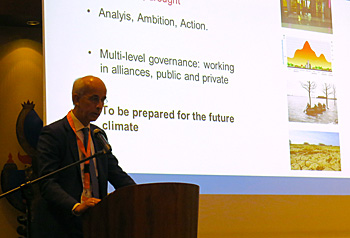 Peter Heij of the Dutch Ministry of Infrastructure told that all 380 Dutch municipalities are now looking for the hotspots were they are most vulnerable for extreme rainfall and heat waves.

One methodology for all cities
Czarnocki explained that one common methodology was used by all cities. This made the programme so special, he said, as the cities are making more or less the same progress and the results are comparable.

The methodology has been developed by a consortium that is now assisting the cities in providing the necessary data for the vulnerability and risks assessments.

Participating in the consortium is Dutch consultant Arcadis. According to environmental division director Ann Rusek the methodology works well and cities are pleased with it and fully involved.

‘The methodology does not provide the one solution but helps the cities in their approach. With every next phase we develop specific templates they can use’, added Rusek. 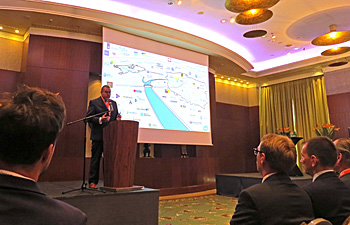 Stress test
Director general Peter Heij of the Dutch Ministry of infrastructure and Water Management, informed the participants in the seminar on the implementation of urban climate adaptation in the Netherlands.

He told that all 380 Dutch municipals are now conducting a ‘stress test’ to identify the hotspots in their cities where extreme rainfall or heat waves may cause serious problems and may lead to damages. Next year these assessments must be ready.

Other topics on the programme of the Dutch-Polish seminar were sustainable water ways, green port development and circular water technology.