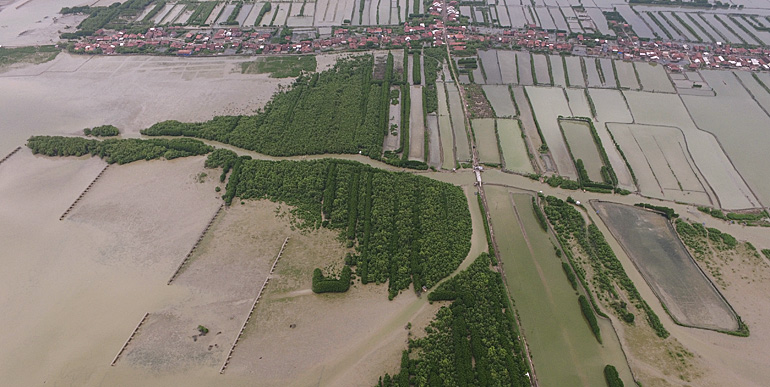 A year after Dutch and Indonesian partners began the restoration of the severely eroding coast in Demak and Semarang in Northern Java, the project is showing its first results.

Based on the principle of through Building with Nature, a sediment-permeable dam has been constructed and mangrove trees have been planted.

The first measurements show 45 centimeters of sedimentation. Behind one of the dams the mangrove seedlings are already emerging everywhere.

It is expected that if the dam structure stays in place, there can be a small forest in that area within a year or two. The mangrove forest should then take over the role of the dams and attenuate the waves and keep the sediment in place. 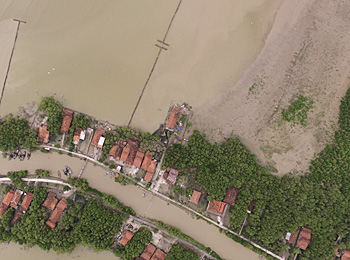 Clearly visible the buildup of the sediment (top right) behind the permeable dams (top middle) that stops the erosion.

Evaluation of first year
The results of the first year are promising and the approach of Building with nature is rapidly gaining in popularity.

During this first year, the project has been able to assess the condition of the coastline and the possible use of the Building with Nature approach for 8 villages, which is always site-specific and requires a thorough understanding.

In the most heavily eroded parts of the Demak coastline, this program is building permeable dams to attenuate the waves and trap the sediment.

This reverses the massive erosion and stimulates the natural re-growth of the mangrove greenbelt.

The program also has the intention to address the complex issue such as land subsidence as a result of extraction of ground water by industries, in particular at the rapidly eroding coast in the South, bordering the city of Semarang.

The first year of implementation of the restoration activities was marked by meetings of the Steering Committee, and the Technical Group in Semarang from 1 to 2 March 2016.

The meeting was attended by representatives from the Ministry of Maritime Affairs and Fisheries, the Ministry of Public Works and Housing, University Diponegoro, Central Java Provincial and Demak District Governments and several Dutch organizations under the Ecoshape Consortium. 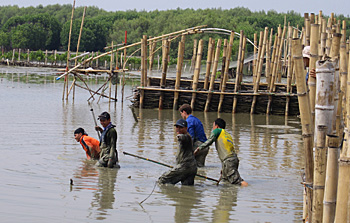 Measuring of the sedimentation behind the permeable dam (right).

Using power of nature
In his opening remarks, Ir. Rido Miduk Sugandi Batubara, director of coastal management, Ministry of maritime affairs and fisheries stated: "The Building with Nature program in Demak and Semarang is a collaborative effort to restore the coastal area of Northern Central Java, using the power of nature".

"Through a unique integration of coastal and mangrove restoration, small sale engineering and sustainable land use we can improve livelihoods in program areas", Batubara said.

Replication in other areas
Nyoman Suryadiputra, director Wetlands International Indonesia, added that the colonization of mangroves this early in the project is very promising. 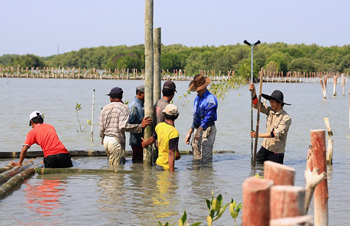 Villagers learning how to construct a permeable dam.

Suryadiputra said: "I look forward to the work to come in the next year in which we continue to construct permeable dams, but also start with capacity building of the Indonesian water sector, and develop implementation guidance so that our approach can be replicated in other areas."

The Building with nature project is a cooperation between the Ministry of marine affairs and fisheries (KKP) and the Ministry of public work and human settlement (PUPR) on behalf of the Government of Indonesia and the Ecoshape Consortium.