Witteveen+Bos to study feasibility for new port in Barranquilla, Colombia

Royal Port SA has commissioned Dutch consultancy firm Witteveen+Bos to conduct a feasibility study for an entirely new port on the mouth of the Magdalena River, near the city of Barranquilla in Colombia.

Royal Port wants to use the study to obtain the required port concession from river management authority Cormagdalena.

For this project Witteveen+Bos has joined forces with two subcontractors: the Maritime Research Institute Netherlands (MARIN) and Colombia's Antea Group.

The new port will cover a total area of 134 hectares, and must be suitable for both inland and sea-going vessels. 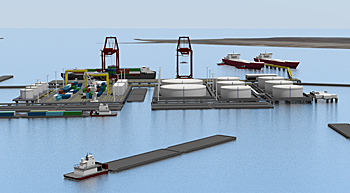 Technical feasibility
In the first phase of the project, Witteveen+Bos will investigate the technical feasibility of the planned port using hydrodynamic modelling techniques and a simulation to demonstrate the plan's nautical safety.

This phase is expected to be completed in October 2016 and will be followed by the detailed design of the port.

Witteveen+Bos experts in the fields of master planning, hydraulic modelling and port structures will perform this work partly in the Netherlands and partly in Colombia.

Key port location
Barranquilla is the capital of Colombia's Atlántico Department and is located on the shores of the Caribbean Sea. It is one of the country's largest cities and a key port location.

Barranquilla has an estimated population of 1.1 million, and currently has no port near the mouth of the Magdalena River (on top photo).

Royal Port SA has therefore asked Witteveen+Bos to investigate the possibilities for constructing an entirely new port on the eastern shore of the river.

Impression of the new port on the mouth of the Magdalena River, near Barranquilla.