The flume can unleash the world’s biggest artificial waves that crash onto whatever type of flood defence system researchers have built at the other end, ranging from a dike, to a dune and a breakwater.

On the occasion of the inauguration the operators had generated a truly huge wave. It unintentionally overtopped the flume. The officials standing next to the trough were taken by surprise and got soaked.

Director Maarten Smit of Deltares invited foreign water authorities to use the new flume to test coastal circumstances at real scale. "Hard flood defences are very expensive. With this new flume we can test soft solutions to damp waves, such a marches or trees. In combination with a much smaller levee this alternative can be much cheaper. 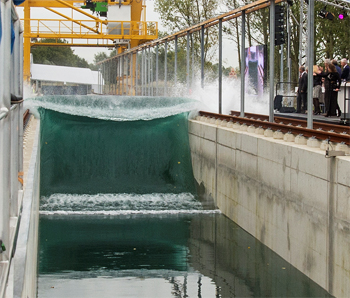 The opening wave broke just before the stage with the officials.

Testing ground for the whole world
Dutch minister Melanie Schultz van Haegen of Infrastructure and environment praised Deltares for having invested in such a new modern facility and underlining the Dutch leadership. "The Delta Flume shows that we have everything we need to be the planet’s testing ground. And there are benefits for everyone. We are leading the way with innovative solutions for our own water challenges. And we can supply other countries with the expertise we develop”, the minister said.

Die-hard civil engineers
Like Deltares director Smits, minister Schultz hopes that many foreign authorities involved in flood safety, will come to Delft and make use of the 1:1 scale abilities of the big flume. "We are world famous for our hard flood defences but abroad our flood experts often advocate soft solutions. Die-hard civil engineers often doubt their real safety. With this new facility we are able to copy the specific circumstances full-scale and determine the real safety." 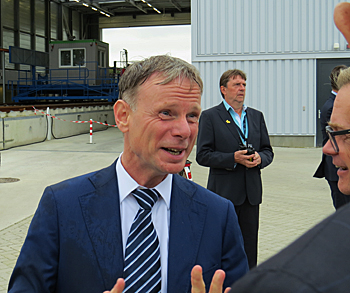 Having experienced the wetting impact of his Delta Flume, director Maarten Smits told about the opportunities for cost-savings.

Cost-savings on coastal engineering
On the occasion of the inauguration director Smits of Deltares emphasized the potential of the 1:1 testing for cost savings: ""Major sums are invested annually to reduce the risks associated with life in deltas. Those investments can sometimes be excessively high, or in the wrong locations. It would be fantastic to have a better idea in advance of the usefulness, necessity and effect of our investments. If we can manage to reduce them by even 10 percent, that is an enormous saving!"

Best armouring constructions
As an example he mentioned the recent request by three Dutch water boards to test a certain rock armour construction on their sea walls. "We can simulate the circumstances of waves battering their sea wall at full-scale. First we will test the strength of their current seawalls, so they know when is the best moment of investment in the additional armouring. Next, we will batter the intended armouring till it breaks. This enables the water boards to optimize their measures and investments", explained Smits.

The Delta Flume is constructed in such a way that it allows researchers to build realistic 1:1 scale models of 85 percent of Dutch coastal defences. 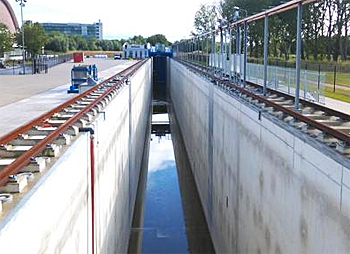 Highest artificial waves in the world
The Delta Flume is 300 metres long, 5 metres wide and 9.5 metres deep. Four pistons can move a gigantic metal plate, the wave board, to unleash any wave pattern found at sea or in rivers creating waves up to 5 metres high.

The flume is built to generate an onslaught of battering waves to test the strength of flood defences, but also other marine and offshore constructions.

The size of the new flume allows to replicate real coastal situations on a 1:1 scale. For testing natural processes this is very important, as with small scale testing materials such as sand, clay and grass behave differently than in the real world.