There are more sandy beaches that grow worldwide, than ones that shrink. The eroding of sand beaches is less dramatic than is generally assumed. This is the outcome of a study by researchers from Deltares, Delft University of Technology and IHE who analysed changes in 50,000 beaches over a 35-year period.

The researchers processed all the data and made it available on the public map Shoreline monitoring (see top screen print) so everyone can now use this tool to study the dynamics of his or her favourite beach.

The findings of the study were published in Nature Scientific Report on 27 April.

Long term behaviour
For the first time, coasts and their long-term behaviour have been analysed on a global scale. The researchers were able to calculate that exactly 31 percent of the total coastline consists of sandy beaches.

Beaches are monitored because they are vulnerable to changes in tide, wind direction and sea level rise.

Less erosion than assumed
Arjen Luijendijk, researcher at Deltares and Delft University of Technology: 'For years, the accepted idea was that 70 percent of our beaches were eroding. We were surprised to see that the sandy coastline does not actually erode that dramatically.

‘Indeed’, Luijendijk continues, ‘there are more beaches that grow than beaches that shrink. The main reason is that we are able to maintain our coasts well, as in the Netherlands, or even to expand them, as in Dubai and Singapore.’

Fastest growing beaches
The researchers observed a the fastest rate of beach growth, eight metres a year no less, in Namibia. It is caused by a mining company that has built sand hills in the sea for diamond mining.

The Netherlands is also in the top ten of beach growth due to its beach nourishment policy and the construction of the Sand Motor, an artificial sand bank in the North Sea that has been designed to disperse its sand along the coastline. 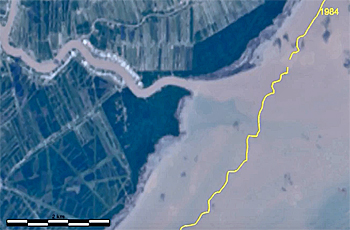 Fastest shrinking beaches
Four of the seven largest eroding beaches are in the United States. Beaches in Louisiana and Texas are being hit particularly hard, sometimes receding by 15 metres a year.

The Mississippi is the culprit in Louisiana where the sand supply has fallen sharply due to the damming of the river. One of the causes in Texas is groundwater extraction in response to the rapid growth of Houston.

Researcher Gerben Hagenaars at Deltares: 'This is a gigantic dataset that we were able to analyse using Google. Our analyses went back to 1984, which is when the first satellite images from NASA were available.’

‘To validate our new method, we compared coasts where extensive measurements have been made such as those in Australia, the Netherlands and the United States', Hagenaars adds.

According to Hagenaars the further development of this type of technology crucially depends on the availability of high-quality, comprehensive test sites on different types of coast worldwide. He refers to an international initiative known as International Coastline Observatories Network (ICON) that will be able to provide in that needed.

Read the full report on Nature Scientifice Reports: The State of the World’s Beaches