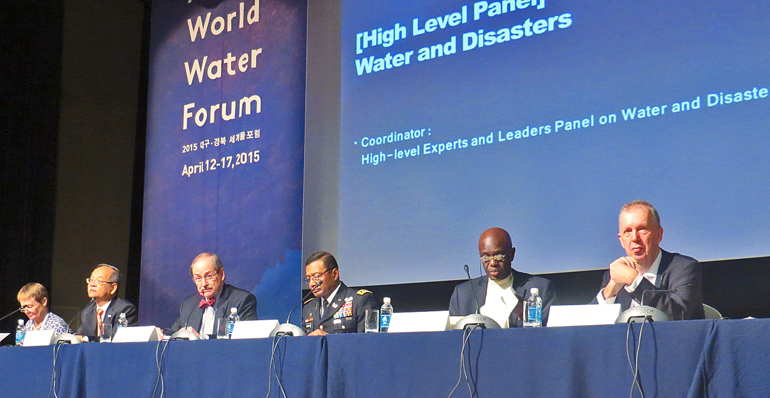 Small floods or short periods of droughts are not the issue but large water-related disasters should be prevented. It avoids much misery and with good governance it is cheaper. That was the main message of the Dutch delegation at the 7th World Water Forum in Daegu, Korea.

Dutch minister Melanie Schultz van Haegen advocated this during a meeting of the High-level Experts and Leaders Panel on Water and Disasters (HELP) that coincided with the forum and strategic advisor Koos Wieriks (top photo right) delivered the same message during a high-level panel on water and disaster. 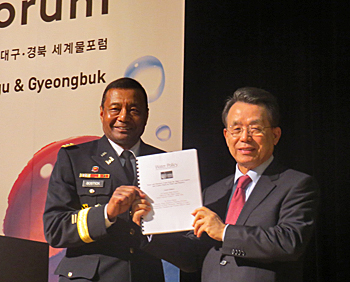 High level panel meeting
The High-level Experts and Leaders Panel on Water and Disasters (HELP) of the United Nations held its annual meeting during the World Water Forum. Dutch minister Melanie Schultz van Haegen attended this meeting as vice-chairman of the panel.

One of the messages in the position paper gives a more detailed understanding and claims that sensible investments in preparation and prevention leads to less loss of life, avoids damage and creates economic growth and stability.

Seung-soo praised the support of the Japanese crown prince and reminded of the former support by another prince, Dutch prince Willem-Alexander, now King of the Netherlands. 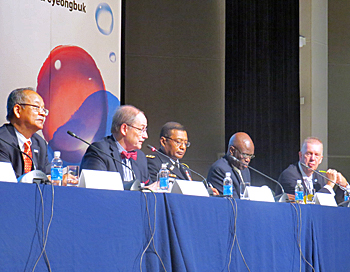 More urbanization, more run off
Chair Dr. Keizrul bin Abdullah of the Network of Asian River Basin Organizations (NARBO) talked about the worldwide impact of the Bangkok flood in 2011. "More damage can be expected", predicted Bin Abdullah, "as more urbanisation will lead to more run off."

On the positive side, he noticed there is more information available on the risk of flooding and society is stronger. He advised to pay special attention to non-structural measures and specifically mentioned the improvement of meteorological services.

Finance follows strategy
"First there is a strategy and then the money", Lt. General Thomas Bostick, Chief of the US Army Corps of Engineers said. "You first have to determine how much risk you are willing to take. Only then, one can start developing plans to make communities more resilient."

Bostick suggested to work out a more precise definition of resilience. This needs to be better defined for all four phases of disaster risk reduction: planning, absorption of impact, respond to impact and finally the adaptation after the impact. During the session a special edition of the Water Policy Journal on 'Water and disasters' was presented. The special edition is published by the International Water Association and provides 10 case studies on water-related risk reduction.

The Dutch contribution is by Koos Wieriks and Niels Vlaanderen who wrote an article on shifting disaster management from reaction to prevention.

All articles can be downloaded from IWA publishing online.