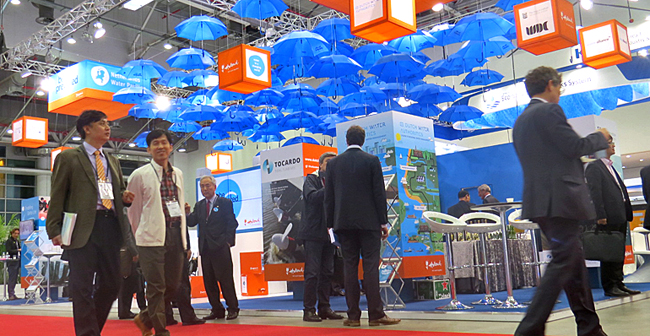 The world's biggest water event came to an end on 17 April with the closing ceremony of the 7th World Water Forum in Daegu, Korea.

The event was attended by 40,000 politicians, political leaders, government officials and experts from 170 countries.

Stand-alone goal for water
Dominating this year's World Water Forum were the post-2015 sustainable development goals to be adopted by the United Nations in September.

In Korea the world water community again made clear it wants a stand-alone goal for water, as has been suggested by the open working group last year.

In a special declaration the forum stressed the importance of water-related issues in dealing with climate change and pledged a joint effort to tackle them. Water is regarded to be at the core of sustainable development.

Be prepared
The Dutch delegation has been very active at the World Water Forum. The central theme was 'Be prepared', based on the Dutch water security policy to avoid water-related disasters, rather than minimizing the damage.

The Netherlands Water Pavilion drew much attention with its ceiling made of umbrellas.

Below a photo impression of some of the Dutch related contributions to an incredible amount of sessions that took place in six days.

Many bilateral agreements with Asian countries 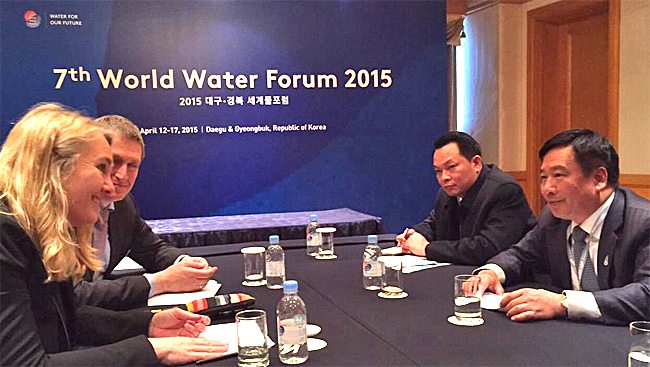 Dutch minister Melanie Schultz van Haegen of Infrastructure and Environment was very active at the forum. Not only did she participate in many sessions, she also had several bilateral talks on collaboration in water projects with ministers from Asian countries, including South Korea, Indonesia and Vietnam. Here seen is minister Schultz (left) talking to her Vietnamese colleague Nguyen Thai Lai on joint projects in the Mekong delta. 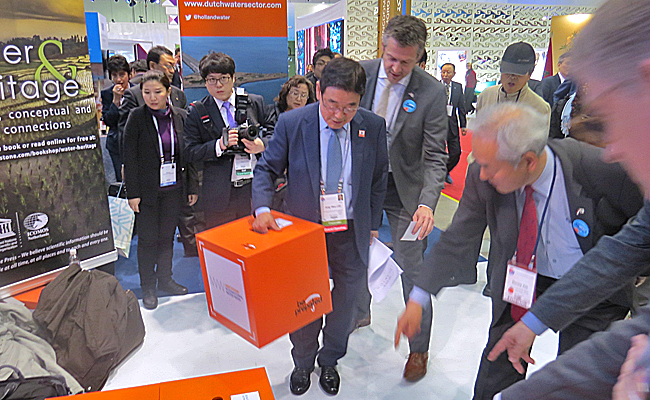 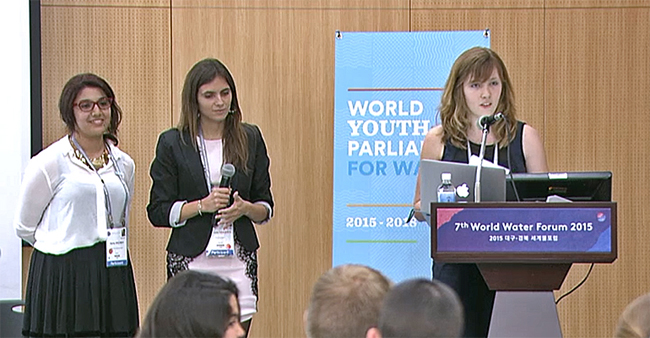 Hundred young water professionals held the third general assembly of the World Youth Parliament for Water. On the occasion president Bart Devos handed over his chair to three young female professionals: Asma Bachickh (new president, left) from Morocco, Antonella Vagliente (vice-president. middle) from Argentina and Susanne Reitsma (vice-president, right) from the Netherlands. These three will lead the young water parliament for three years till the next World Water Forum in Brasil in 2018.
Dutch representative Susanne Reitsma asked the global water community to have more youth involved and use their enthusiasm and fresh ideas to counter the looming water crises. 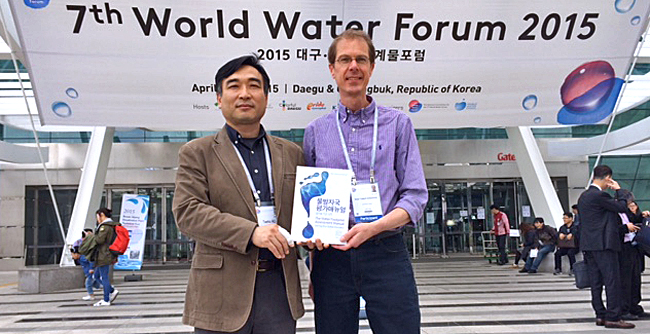 Co-founder and member of the council Arjen Hoekstra (right) of the Water Footprint Network launched, together with translator Taeho Ro, the Korean version of the Global Water Footprint Assessment Manual on 16 April. This guide was first published in 2011 and presents a scientifically method for companies to understand their dependency and impact on global water resources. It also offers guidance on response strategies that conserve water for industry, communities, and nature. 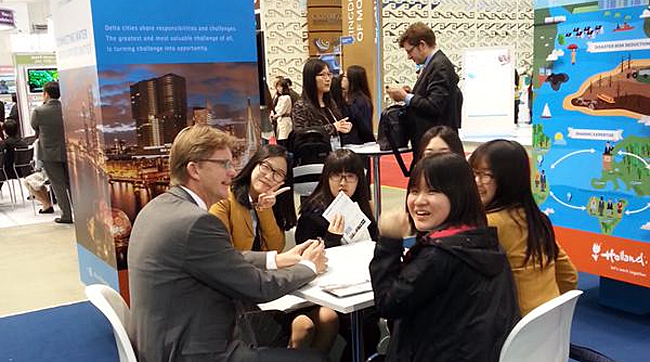 Director Hein Molenkamp of Water Alliance explains the future generation Korean water leaders that it is possible to live below sea level. Water Alliance was one of the participants in the Netherlands Water pavilion, focusing on the innovation of sustainable water technology.

Way out of a water conflict 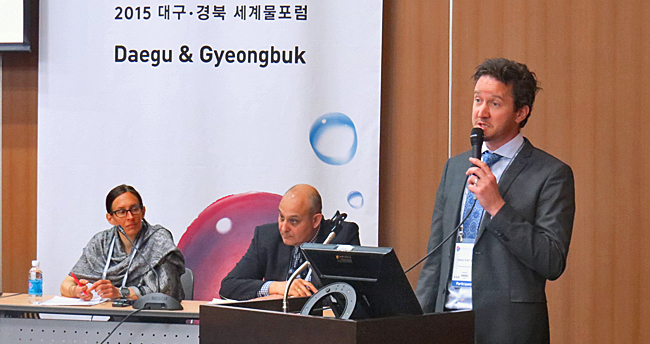 Joint fact finding is an important tool in water diplomacy between two countries that have a conflict over a fresh water resource. This experience was shared by Patrick Huntjens of The Hague Institute for Global Justice. Huntjens is an active mediator in the water conflict between Israel and Palestine. He was one of the speakers at the session on water diplomacy and multi-level governance.

A show case on water quality 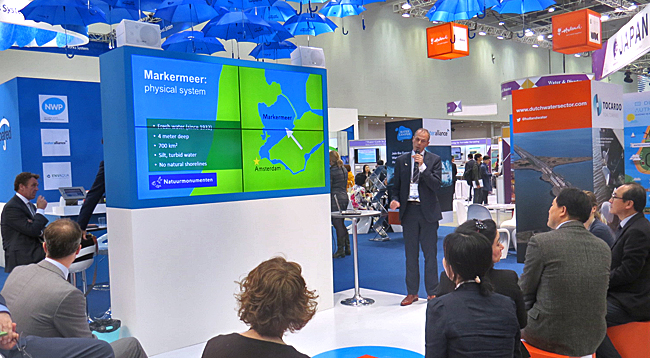 In many parts of the world water authorities face fast deterioration of the quality of fresh water bodies. Roel Posthoorn of the Dutch nature preservation organisation Natuurmonumenten presented in the Netherlands pavilion the most recent plans to restructure Marker lake. Based on the concept of Building with nature, new islands will be created in this fresh water lake to restore the aquatic ecology. Simultaneously the lake will be redesigned to allow more recreation.

Women as agents of change 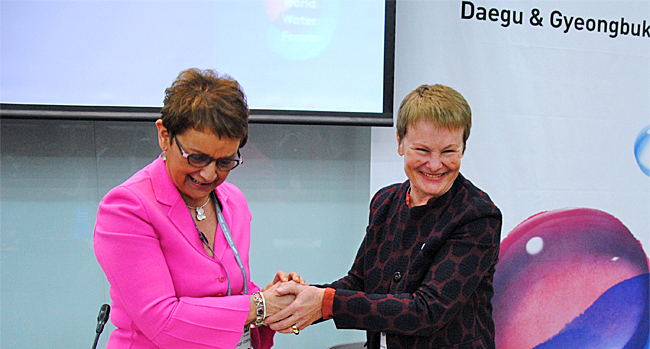 Dutch-based organisation Women for Water Partnership was active in many sessions. At one of the sessions organised by the partnership a plea was made for a new culture of water with more women on managerial and scientific positions. President Mariet Verhoef-Cohen (left) signed an agreement with chair Ursula Schaefer-Preuss (right) of the Global Water Partnership to coordinate the activities in order to reach gender balance. 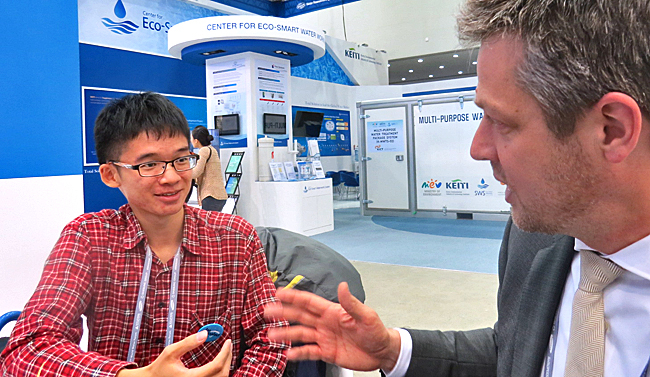 Several times he visited the Dutch pavilion, preparing himself for his new job as ambassador for the Young water professionals programme of the next Amsterdam International Water Week . Here Yi-Lin Tsai from Taiwan is seen talking to director Lennart Silvis of the Netherlands Water Partnership. Yi-Lin Tsai will replace the current ambassador Marie Sagen from Norway in November. 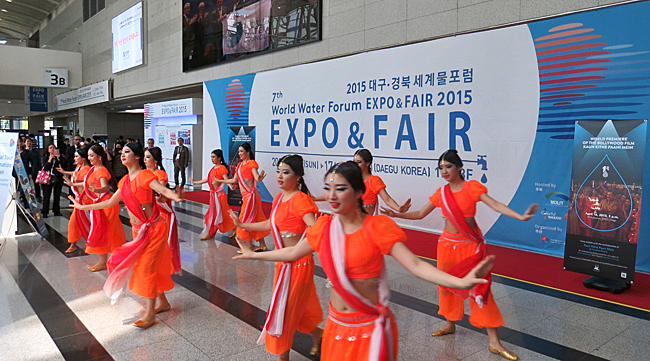 Several times during the forum a Bollywood dance troupe performed on a folk song from the Bollywood film 'Who is how deep in water'(2013). The performance was part of the presence of the non-profit organisation One Drop, founded by Guy Laliberté of Cirque du Soleil.

Next World Water Forum in Brasil 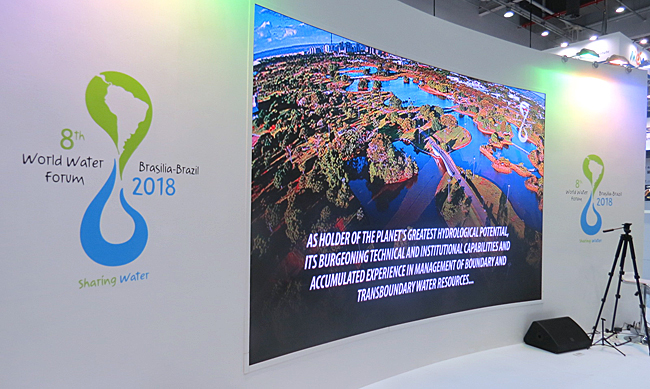 The Brasilian pavilion already looked ahead to the next forum that will take place in 2018 in Brasil.