WWF7: Global monitoring water quality: top down or bottom up?

A global data system on the water quality has to be simple and accessible. So far the experts agreed at the monitoring session at the 7th World Water Forum in Daegu, Korea on 14 April.

The session Water quality monitoring from a global perspective was organised by the Netherlands Water Partnership. 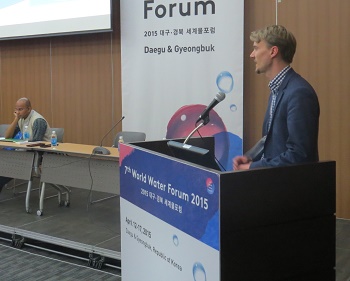 Phillipe Saile of the German Federal Institute for Hydrology explains the current status on global data centres that collect information on the quality of surface water.

Finding the right balance
The United Nations are about to set a global target for water quality, calling for a 50% reduction of the discharge of all waste water by 2030. To track the progress of this target it is most obvious to monitor the effects of the envisioned additional waste water treatment, being the improvement of the quality of the receiving surface water.

This doesn't have to be the monitoring of 200 environmental relevant substances as is currently done for the Rhine river. There has to be a right balance, Koos Wieriks of the Dutch ministry of Infrastructure and Environment said in his introductory presentation.

Two major data centres for surface water
Phillipe Saile of the German Federal Institute for Hydrology explained the efforts that have already been taken by the World Meteorological Organisation (WMO) and the UN Environmental Programme (UNEP).

Saile told that two data centres already exist. UNEP has its Global Environment Monitoring System (GEMS) Water Data Centre collecting data from more than 4,100 stations, close to 4.9 milliollection systems were presented, showing how different the monitoring of water quality can be. Tjitte Nauta of the Dutch research institute Deltares told how his institute assisted the Singapore water authority PUB to install a very advanced system to monitor the water quality of the rivers, cannels and the marine bay. The system allows PUB to react quickly in case of an occurring water pollution. 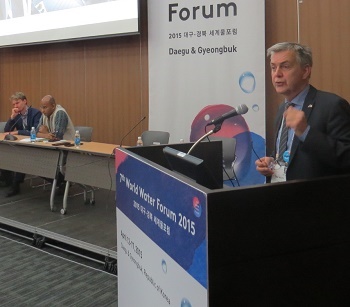 Graham Alabaster of UN Habitat closed the session explaining that the GEMS data system is a good first start for global monitoring. He foresees that it will be difficult to link all the national data systems on water quality. Some national systems are very advanced and others are very basic.

Alabaster put forward the idea of a ladder where operators of data systems can jump in depending on the input that can be delivered.

Video of the presentation by Amitangshu Acharya on the monitoring activities of Akvo.