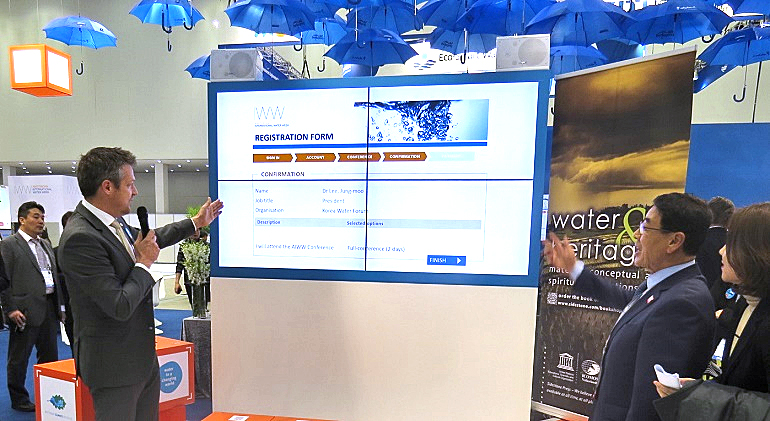 Governments and institutes from Korea and the Netherlands seized the opportunity of the 7th World Water Forum in Daegu to make agreements on closer cooperation. 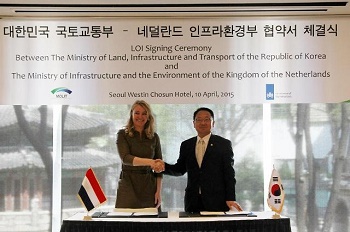 Two signing ceremonies
Water sectors of both Korea and the Netherlands realise that future water issues will be more complex and ask for international cooperation. This shared view encouraged both sectors to expand their cooperation.

Dutch minister Melanie Schultz van Haegen (left on photo) and her Korean colleague Il-ho Yoo of the ministry of land, infrastructure and transport, signed the letter of intent in Seoul on 10 April, just before the start of the 7th World Water Forum.

Dutch ambassador in Korea, Mr. Lody Embrechts had the honour to introduce the next young ambassador for the Amsterdam World Water Week, Yi-Lin Tsai from Taiwan.

During the network reception at the Netherlands Water Pavilion on 13 April, president Dr. Jung-Moo Lee (top photo right) was invited by NWP-director Lennart Silvis (top photo left) to sign in for a Korean delegation to attend the third edition of the Amsterdam International Water Week in November.

Korea is the first delegation to register for the event.

Matchmaking with Korean water companies
Both NWP and KWF cooperated in the organisation of the Water Business Forum that takes place during the 7th World Water Forum in Daegu.

Korean water companies and organisations have been lined up to meet partners that are interested in partnerships.

The Netherlands Water Partnership assisted in the matchmaking for potential European partners.