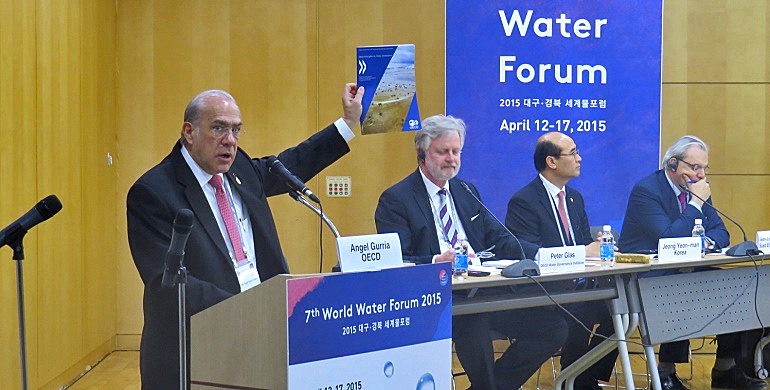 Chair of the OECD Water Governance Initiative, Peter Glas, handed over the Daegu multi-stakeholder declaration on 12 principles for more effective water governance to secretary-general Angel Gurria of the OECD.

The handing over took place at the World Water Forum in Daegu, Korea on 13 April.

A special steering committee, chaired by the president of the Dutch Water Authorities, Peter Glas, worked on the principles for three years.

The draft version was presented at a special session during the 7th World Water Forum. The final version is officially to be adopted by the OECD in Paris in June. 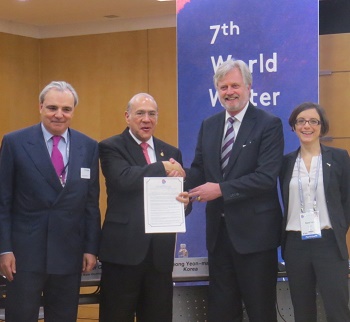 More effective and efficient solutions
During the session OECD secretary general Angel Gurria said the principles have been developed to address governmental bottle necks. “Water issues are local and we have diagnosed that too often governance stands in the way of effective and efficient solutions. We hope that these principles will create a more common framework and make governance more fit for the future”, Gurria advocated.

Less fragmentation
In preparation of the principles the OECD studied water reforms in 5 different countries. According to Gurria these studies learned there is much room for improvement. Especially by countering the fragmentation of national water authorities and institutes. Gurria specially referred to the in-depth study of the Dutch water governance in 2014. “The Dutch water authorities aim to reduce their water costs with 750 million euro by 2020. For this they agreed to reallocate their responsibilities and work more closely together. If there is still room for improvements in the Netherlands, there must surely be room for improvements anywhere”, Gurria said. 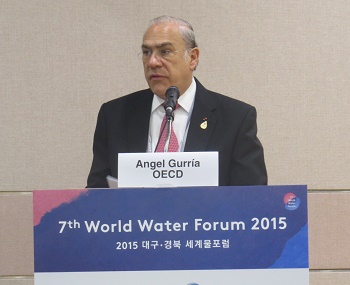 Involvement of citizens
President Peter Glas of the Dutch Water Authorities emphasised that the principles are a general framework and it is up to the local stakeholders to continue their own process of water policymaking. “The trend is to broaden the engagement and involve all stakeholders. This is becoming more important as it will increase the willingness to pay for water services”, Glas said. He especially advocated to involve citizens. “In order to get more grip on the urban water issues, it is crucial to engage communities. Better access to information can be one way to achieve this.” According to Glas there is no blue print. “Every community will do it in its own way.”

Director general Jean-Louis Chaussade of Suez Environnement underlined this when he mentioned the three important lessons on water governance by his company. “All situations are different and solutions have to be tailor-made. Secondly we learned that the solutions cannot be technical only. There is also a social and political aspect. Thirdly we learned it is important to have all stakeholders on board. A contract with a local municipality is not sufficient. If we want our company to be recognized for our water services, we need to involve the local non-governmental organisations and the citizens too”, Chaussade admitted.