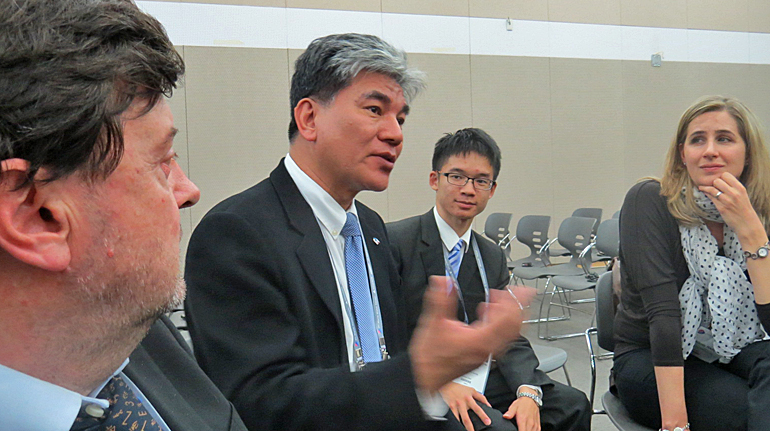 "Typhoon Morakot hit Taiwan in 2009 and brought 3,000 millimeters of rain in three days. Such an event only occurs once every 2,000 years, but we had a similar extreme weather event only five years earlier. The climate is changing. It is time for action", professor Lee Hong-yuan, National Taiwan University said at the 7th World Water Forum in Daegu.

The session highlighted the need for a long term perspective on floods and droughts, in order to be able to organise a prevention-based policy. 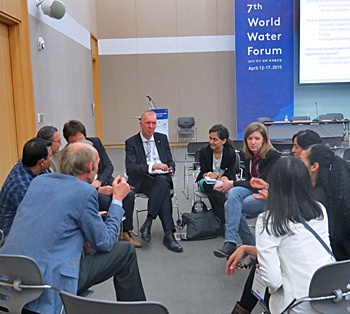 Participants debated in groups the possibilities to communicate the water challenges at the many top conferences on climate and SDGs that will take place this year.

Many disciplines involved
"The public is aware that climate is changing, it is time for politicians to act", Lee Hon-yaun said. As a former Taiwanese minister he knows what is needed. "The cooperation between the ministries has to change. There are many disciplines involved to mitigate water-related risks. It is crucial to have a capable ministry with knowledge of all different policies involved."

Lee requested special attention for drought as these kind of weather events have less attention in the media as there are no direct casualities.

Uncertainty is no excuse for inaction
Senior advisor Koos Wieriks of the Dutch ministry of Infrastructure and environment also kept a strong plea for action. "Mega cities are often located at the end of a river. They are double at risk as they can be flooded from the sea and from the river. Often the poor citizens live in the lowest districts and are most at risk. It is a result of poor management and no land planning", Wieriks said.

According to Wieriks it takes long term integrated policies and spatial planning to shape the cities. In river deltas this can involve large parts of a country. "There is no direct gain", he admitted and the climate change brings many uncertainties. "But this is no excuse for inaction".

Wieriks urged the water community to talk about disaster risk reduction at other conventions, such as the global climate negotiations, and at top conferences on health, energy and food. 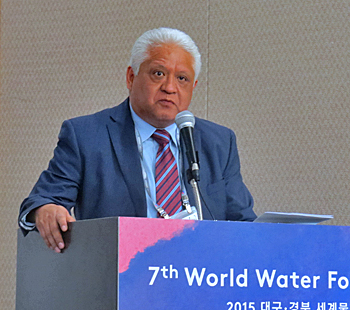 Abel Jimenez Alcázar of the Mexican water authority Conagua assured that his country is steadily moving towards more action.

Hit almost simultaneously by two hurricanes
Manager of basin councils Abel Jimenez Alcázar of Conagua told that the Mexican government is moving towards more prevention. He reminded of two tropical cyclones that hit Mexico in 2013 almost simultaneously from both sides. Hurricane Ingrid came in from the Gulf of Mexico and 24 hours later hurricane Manual hit from the Pacific Ocean. Both hurricanes caused many floods.

The combined impact from the two hurricanes affected two-third of Mexico, killing 192 people and causing 5,7 billion USD of damage. At the same time, other areas suffered from severe drought.

Alcázar explained that all Mexican states are required to make a climate adaptation programme. "There is a lot of delay", he admitted. So far only 10 of the 31 federal states have such a programme in place.