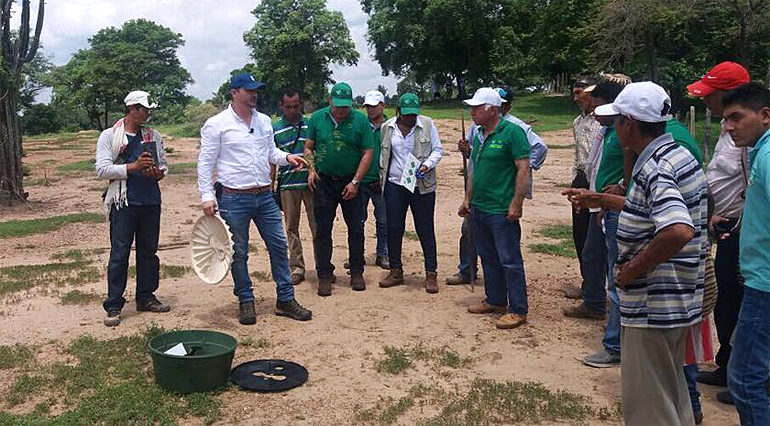 Dutch company Groasis will run a pilot project in Colombia to investigate the impact of its Growboxx plant cocoon that uses 90 percent less water to grow plants. The project is part of the UN’s World Food Programme for ‘Zero hunger by 2030’. It combines ecosystem restoration and agroforestry, thus restoring degraded land.

The pilot to study the impact of the Groasis water saving technology will start in December. This summer the Growboxx was introduced in four Colombian villages (see top photo). 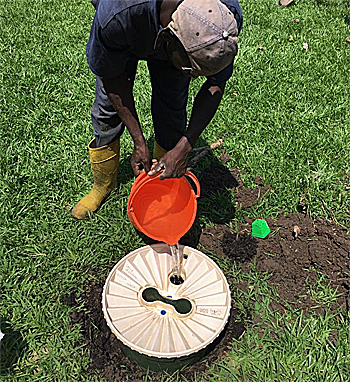 Only one bucket of water can make a fruit tree grow in very arid areas.

Zero hunger
Groasis is part of the first cohort of 27 start-ups to receive support through the UN’s World Food Programme’s Innovation Accelerator.

The first selection beat competition from more than 100 start-ups who applied to the Global Impact Challenge, a joint call for innovations by Singularity University and the UN World Food Programme for “Zero hunger by 2030”.

‘We are very honoured that we now have been selected as one of the winners’, said Pieter Hoff, founder of Groasis, ‘and to launch our first project with Wórld Food Programme. We share the same goal of achieving zero hunger’.

Less depend on aid
For the pilot on Colombia, Groasis provides the low-cost, scalable solution - the Groasis Growboxx® - which enables marginalized Colombians to grow their own fruit and vegetables thus lowering their dependence on aid.

The project focuses on the food production on degraded land with a promising water saving technology from Groasis, the Growboxx plant cocoon, which can be deployed on any type of soil and in any type of climate.

Less costs, less water and more crop
The Growboxx is a smart designed ‘bucket’ to collect water from rain and night time condensation in a reservoir.

The water is gradually released into the ground and stimulates the plant to develop a root structure. The box acts as a shield for the water in the upper ground and limits evaporation.

Groasis’ technology has already proven itself in more than 40 countries around the globe, offering 90 percent cost savings, 90 percent water savings, and a 90 percent survival rate of the trees and vegetables that are planted.

Groasis has installed the inexpensive, easy-to-use Waterboxx in many different countries, mainly to grow trees to combat desertification in arid regions.

This news item was originally published on the website of Groasis.

Groasis’ director Pieter Hoff reports on a tree planting project in the desert of Ethiopia.