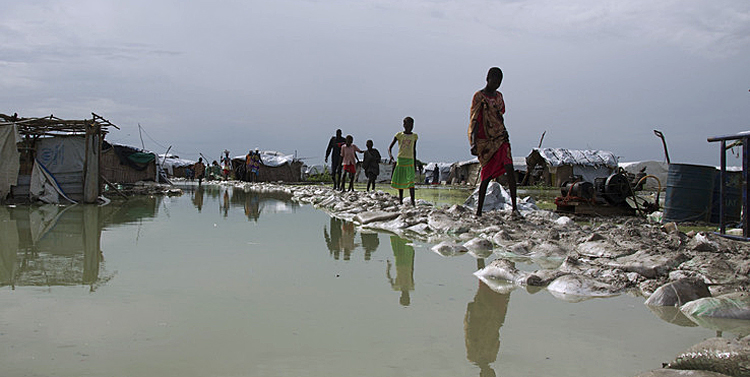 Dutch consultancy firm Grontmij coordinates the construction of a levee fully encircling the refugee camp Bentiu in South Sudan. The project started in February and has to be ready by May when the next rain season starts.

The refugee camp with its 50,000 inhabitants, is located in a low lying swamp area. The surrounding levee is to prevent a flooding of the camp as in August last year.

Typical Dutch solution
The flood protection construction is a typical Dutch solution as it is based on the concept of a polder that is fully surrounded by a levee. The Netherlands has over 50 of this levee types. Some encircle only one small polder but many encircle large cities.

In the case of the refugee camp, also a drainage scheme will be constructed with drainage canals and pumping stations.

The combination of the levee and the drainage scheme is to prevent refugees having to wade through ankle-high mud again in June when the heavy rain fall returns. 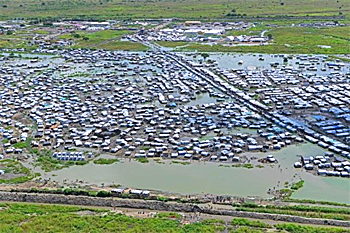 "What we’re doing in Bentiu is an excellent example of the added value of Dutch knowledge and expertise", said Ms Ploumen. "Most important of course, is what we’re doing to give the refugees better places to live. At the same time, we’re highlighting the major role Dutch businesses and knowledge institutions can play in emergency aid provision.

Former UN-compound
South Sudan’s civil war broke out in December 2013, creating a huge flood of refugees, both within South Sudan and into neighbouring countries. Violence has driven two million people from their homes, including people fleeing heavy shelling of the northern town of Bentiu.

Many of its inhabitants have sought protection in the low-lying UN compound nearby, despite it being ill-equipped to receive refugees.

More than 50,000 people are forced to live in this 70-hectare swamp. In the 2014 rainy season the entire camp flooded, including the toilets, schools and hospital.

In the middle of war zone
The project aims keep all the displaced persons at the camp – whose numbers continue to increase – and aid workers dry in the 2015 rainy season.

It is a large project, in a difficult location, in the middle of a war zone. The total cost amounts to some USD 20 million, with USD 5,4 million provided by the Netherlands. Other financial backers include the UN, the EU and Switzerland.

This news item was originally published on the website of the Dutch government and Grontmij (in Dutch only).