At least 2,000 households in Mopti, Mali, as well as an irrigation area of 300 ha, are now protected against floods from the Niger river.

On request of the regional government a 4,1 km long levee has been constructed with the support of the Dutch government.

In the presence of two Malian ministers and the outgoing Dutch ambassador Maarten Brouwer, a festive inauguration took place on 4 June, 2016. 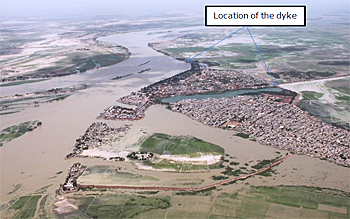 Mopti flooded by the Niger river in September 2014.

A study revealed that a levee could protect the eastern side of the town and, in addition, open up the eastern part to a road network via a dirt road.

In August 2014 the design of the levee started and the construction was finished in March 2016.

The design and construction was led by CARE International in Mali, within the framework of the programme for the development of the Inner Delta of the Niger river (PADIN II), in close cooperation with the regional government in Mopti. 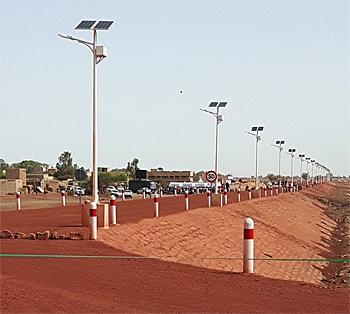 The laterite road and the solar powered streetlights.

Improvement of sanitation
At least 2,000 households are now being protected, as well as an irrigation area of 300 ha. Also with regards to sanitation in the town the levee is a clear improvement and encouragement to improve the management of waste and wastewater.

Because of the levee construction 4 ha of land has been added to Mopti, which is likely going to be used for house construction.

On the levee a laterite road has been constructed which relieves Mopti town from traffic. Streetlights have been provided, powered by solar energy.

Famous Dutch water engineer Lely
The levee has been named after Cornelis Lely, a famous Dutch engineer and statesman, who developed the Zuiderzee works, a scheme of dams and dikes, 145.000 ha land reclamation and water drainage works, including the 32 km closure dam, the Afsluitdijk.

This news item was originally published on the website of the United Nations Multidimensional Integrated Stabilization Mission in Mali (Minusma - in French only) and the online article by senior water manager Peter Zoutwelle of the IWRM/GIRE programme for Mali.