What are you looking for?
News 4 September 2015

Stockholm World Water Week: A look back on the stepping stone to New York and Paris 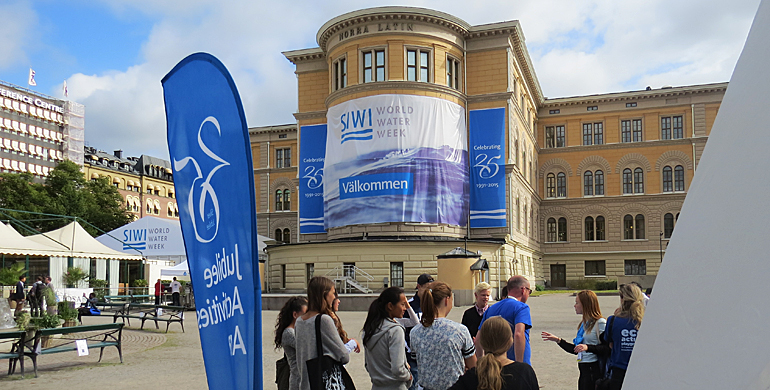 This year's Stockholm World Water Week welcomed over 3,300 participants from more than 125 countries.

It was business as usual for the participants to exchange ideas and experiences on urging local, regional and global water issues. Different this year was the fact that the event took place just prior to two important global summits: the UN general assembly in New York late September, where the new sustainable development goals will be adopted, and the climate summit COP21 in Paris in December, where climate adaptation will be high on the agenda.

A resource, not a sector
Water is a cross cutting resource, not a sector, said director Karen Lexén of the Stockholm World Water Week at the closure of the week. She urged the water community not to go to Paris to defend the sector but to offer adaptive water management and help in the construction of resilient infrastructure.

The sustainable development goal nr.6 for water was a key issue at many of the 200 sessions. Especially the topics of governance, financing and monitoring triggered interesting debates. It was said many times: 'water is connected', meaning water is above all a local issue requiring tailor-made measures. Different solutions for different circumstances.

It was this growing awareness that made this year's edition of the Stockholm World Water Week above all a stepping stone to the UN General Assembly in New York and the climate summit COP21 in Paris.

The Dutch delegation has been very actively involved and contributed with its expertise, both in the discussions on how to achieve universal access to water and sanitation, and on the issue of disaster risk reduction.

Below a selection of photos, giving an impression of the event and Dutch related contributions. 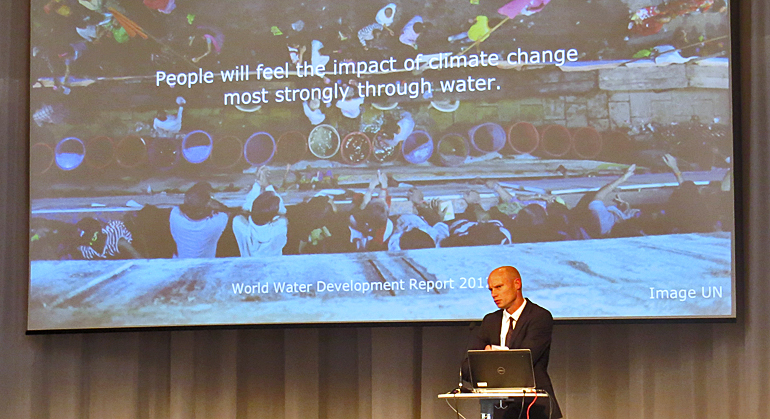 Can we honestly measure WASH-impact? 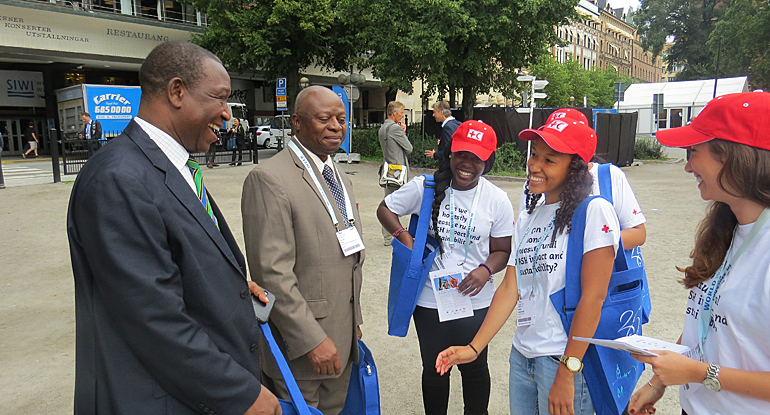 On behalf of the Red Cross a group of girls drew attention for a session on how to measure the impact of WASH-measures. The impact is not only about hardware infrastructure but also about sustainable services and behavioral change. How do you measure those?
See the full recording of this session (1 hr 31 min): Can we honestly measure rural WASH impact and sustainability 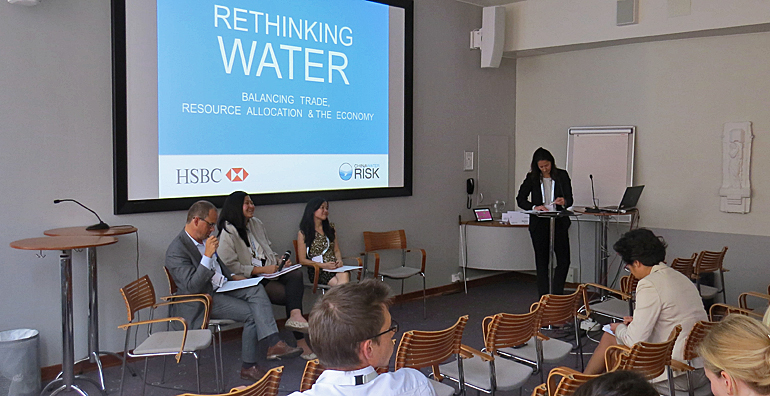 Senior advisor Piet Klop (left on photo) of the Dutch pension fund PGGM (left) participated in a session on water scarcity in India and water trading rights in China. Klop expressed his view on resource allocation and balancing trade-offs. He acknowledged that PGGM monitors the growing water risks for its portfolio of 3,000 companies but he also downplayed the importance of water as it is only one of the many financial risks for investors.

One of the hot items at the Stockholm water week was the monitoring of the sustainable development goal on water. Executive chair Catarina de Albuquerque (left) of Sanitation and Water for All (SWA) suggested countries to develop a national WASH-roadmap for which they can be hold accountable. In her organization many countries - both donors and developing - already participate, so Albuquerque thinks SWA is an excellent existing platform to monitor the progress and identify bottle necks. Here seen is Albuquerque talking to Erma Uytewaal of Dutch-based IRC that is one of the SWA-partners. 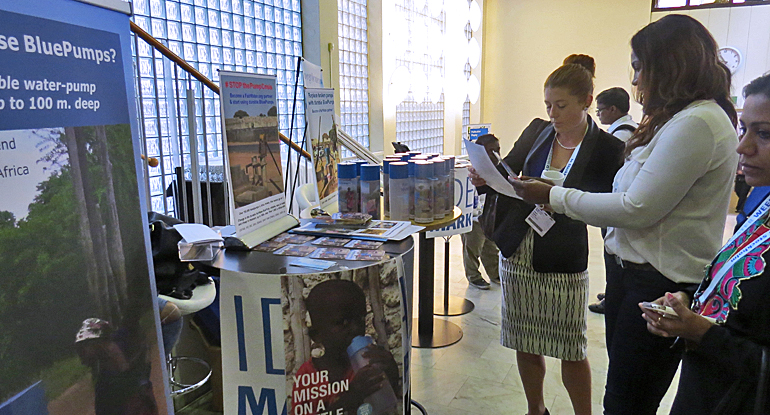 Fair Water and Join-the-Pipe combined their participation in the Ideas' marketplace, a space dedicated to ideas and projects seeking funding or partnerships. FairWater displayed their durable BluePump and Join-the-Pipe their re-fillable 'buy one- give one' water bottles. FairWater offered schools a replacement of broken pumps in Africa, donated with bottles for the school kids. 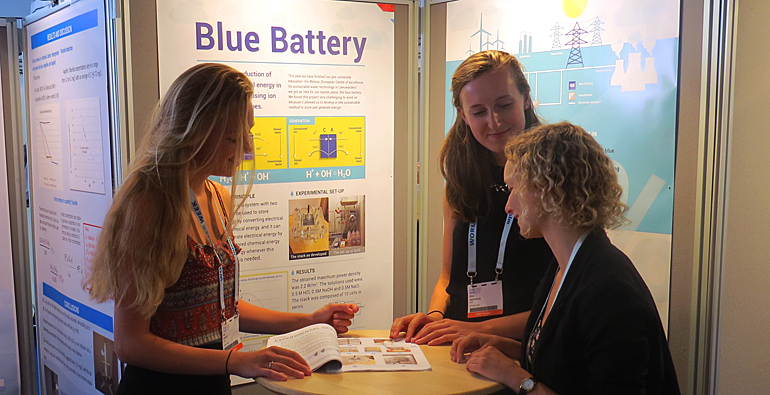 Dutch students Mei Nelissen, Eline Jagtenberg and Lotte van der Velde (from left to right) pitched their entry for the Stockholm Junior water prize to an international jury. Their entry was the Blue Battery, a concept to recover electricity from fresh water and salt, with the help of ion-selective membranes. Unfortunately for them the competition was too strong. This year's prize went to American student Perry Alagappan for his invention of a water filter to remove toxic heavy metals that origin from electronic waste in the water. 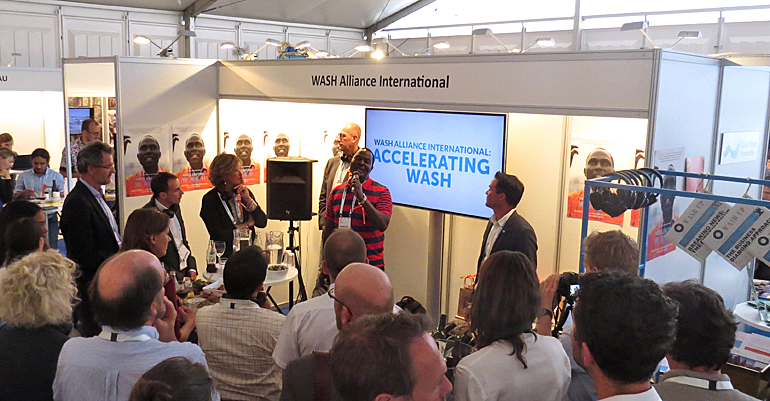 A crowded booth for Dutch Wash Alliance when it launched a new concept to accelerate the implementation of new WASH-facilities with less donor money. The concept is based on creating a local business case for selling water products and services. Once this system starts to work it takes over and makes external subsidies redundant over time, said Tobias Omufwoko (center), country coordinator of WASH Alliance in Kenya. 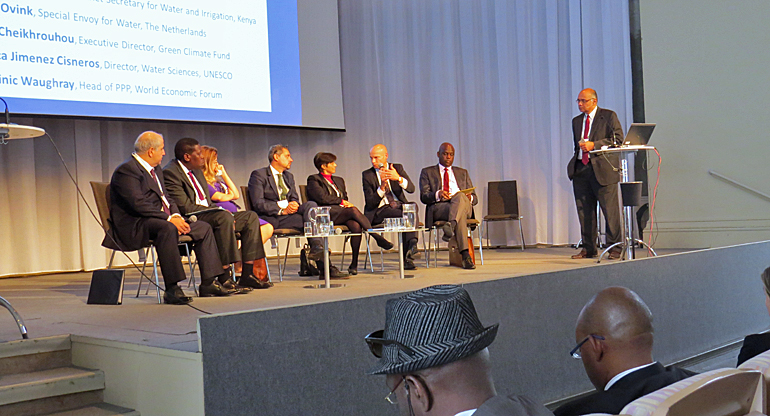 Climate change manifests itself to a large extend through water. This notion was key during the Stockholm water week. "We can use Paris as a lift off for a water agenda. Let's grab that space", suggested Junaid Ahmad (right), leader of the World Bank Group's programme on Water global practice. He moderated a high-level panel discussion that included Dutch water envoy Henk Ovink (with microphone). Introduced as 'the flying dutchman', Ovink talked about his experience with water resiliency after superstorm Sandy hit New York three years ago. "Next to politics, next to policies, we put in place practise and partnerships ", Ovink said.
See the full recording of this panel discussion (1 hr 24 min): Getting water in COP21: the economics of water and climate 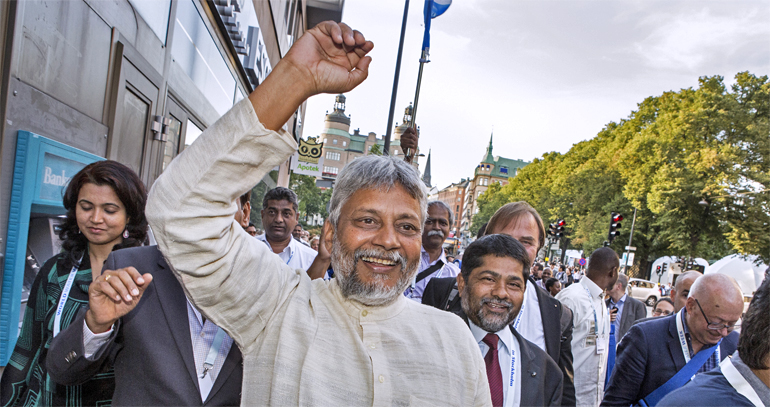 Rajendra Singh of India was awarded this year's Stockholm Water Prize, for his efforts to improve water security in rural India, and for showing extraordinary courage to improve the living conditions for those most in need. Being an activist Singh took the lead in the first Water Walk, a march through the city centre of Stockholm.

The next World Water Week will take place from 28 August till 2 September 2016 and the theme will be 'Water for Sustainable Growth'.