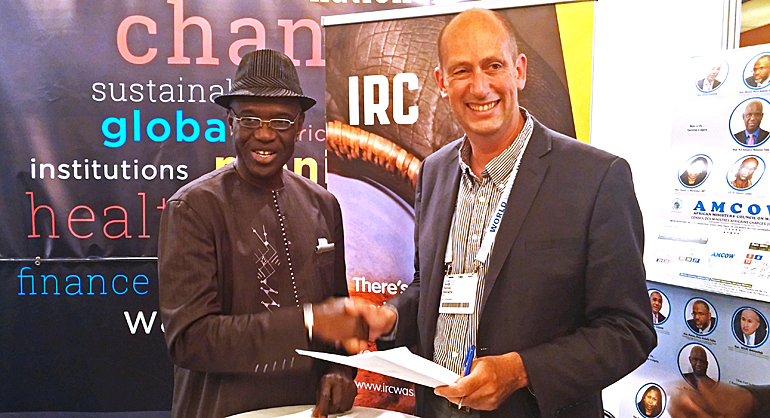 Dutch non-governmental organisation IRC and the African Ministers' Council on Water (AMCOW) signed a partnership agreement to work together on the delivery of lasting WASH services in Africa.

Both organisations will collaborate on sector learning, knowledge management, monitoring and evaluation and capacity.

The agreement was signed at the Stockholm World Water Week on 25 August 2015.

The agreement formalises their partnership. 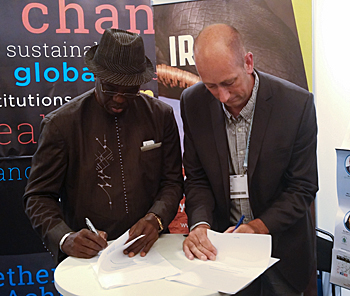 Impact on national WASH sectors
Speaking during the ceremony, IRC’s CEO Patrick Moriarty said: "We believe in strengthening governments, and as an intergovernmental organisation Amcow plays an important role in leading national sectors to create sanitation and water for all. We are happy to support Amcow."

Mr. Bai Mass Taal, Executive Secretary of Amcow added: "IRC is a knowledge-based organisation, and with this they can play a role to assist us."

Amcow’s mission is to provide political leadership, policy direction and advocacy for sustainable social and economic development in Africa.

Together, IRC and Amcow will work to strengthen the WASH sector in African countries and to address challenges in the post- MDG agenda.

About Amcow
The African Ministers' Council on Water (Amcow) was formed in 2002 in Abuja, Nigeria, primarily to promote cooperation, security, social and economic development and poverty eradication among member states through the effective management of the continent’s water resources and provision of water supply services.

About IRC
IRC is an international think-and-do tank that works with governments, NGOs, businesses and people around the world to find long-term solutions to the global crisis in water, sanitation and hygiene services. At the heart of its mission is the aim to move from short-term interventions to sustainable water, sanitation and hygiene services.

With over 45 years of experience, IRC runs programmes and projects in more than 25 countries and large-scale projects in seven focus countries in Africa, Asia and Latin America. It is supported by a team of over 100 staff across the world.