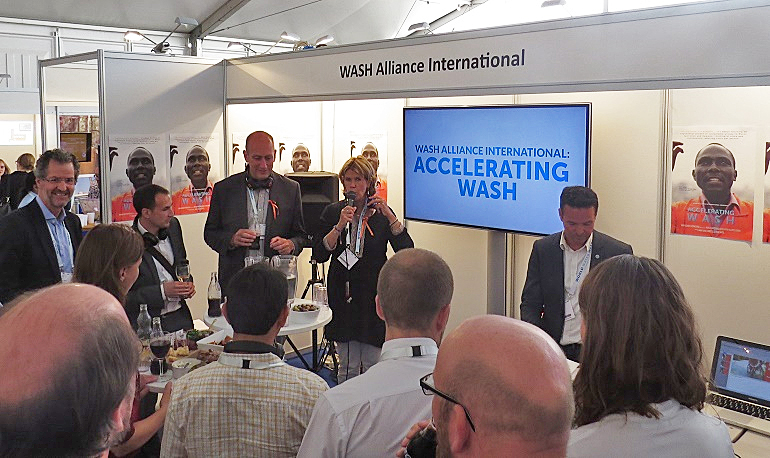 Dutch aid organisations that collaborate in the WASH Alliance International, announced at the Stockholm World Water Week to step up and accelerate the pace with which they realize new water supply and sanitation facilities in less developing countries.

WASH Alliance International will turn away from facilitating the construction of new hard-ware facilities, to focus on facilitating local markets for products and services.

At their booth at the Stockholm World Water Week, the WASH Alliance International marked this new way of working by launching a video on 26 August.

Ariette Brouwer presents the new approach at the booth.

Huge task ahead
The acceleration fits with the looming sustainable development goal nr.6 on water that is to be adopted by the United Nations late September. This goal aims at universal access to clean water and sanitation by 2030. At the Stockholm World Water Week the global water community discussed how this can be achieved.

It is a huge task and only 15 years to accomplish it. Additionally donor countries, like the Netherlands, are reducing their budgets for development aid. So there is also less traditional north-south money for conducting water projects.

Here the new approach of the Dutch WASH Alliance International comes in. Simply said, it is a system of creating demand for water and sanitation so local entrepreneurs can step in and start a business, such as a water kiosk or a service to empty pit latrines.

“To be able to create such a local market it is absolute vital to include businesses, governments and citizens. All have to work together effectively”, emphasised director Ariette Brouwer of Simavi, one of the seven leading Dutch partners, on the occasion of the launch in Stockholm. 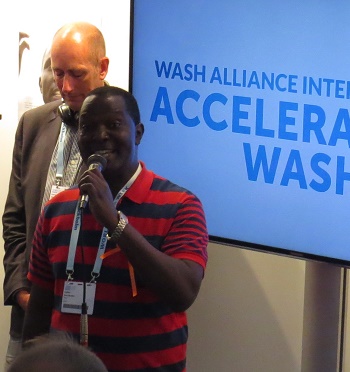 More with less money
Setting up a market is not completely new to WASH Alliance. According to Brouwer it has already supported initiatives of entrepreneurs to deliver WASH products and service.

“When we do traditionally hard-ware construction projects it costs us 66 euro per person to realise clean water and sanitation. With the new approach we are able to achieve the same for only 20 euro per person and we believe that by 2030, when the local WASH-markets start growing, this can decline to less than 10 euro”, predicted Brouwer.

One of the major new activities for WASH Alliance International will be training local entrepreneurs and government staff on social marketing, creating demand for water and sanitation.

System takes over
“When these stakeholders work effectively together, the systems takes over, making external subsidies redundant over time and accelerating access to safe sanitation for a growing urban population”, said Tobias Omufwoko, country coordinator of WASH Alliance in Kenya.

Brouwer adds one important element for the scaling up. “We want to work on district level and provide sustainable water and sanitation for all. This creates not only a larger market, but is also enables us to combine our efforts for both the urban and rural areas in a district.” 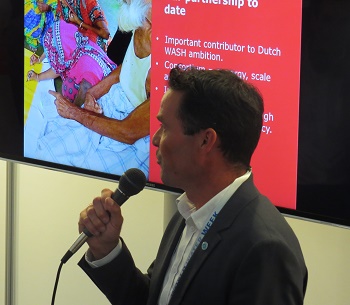 Pim van der Male assured that the new approach is fully backed by the Dutch government.

Other financers step in
The Dutch government strongly supports the new approach of the WASH Alliance International. “We have less budget for development cooperation, but this way we can still achieve more”, said Pim van der Male, senior policy officer for water management of the Dutch Ministry of Foreign Affairs. “An additional advantage is that the system makes it easy for other financers, such as local governments or banks, to step in.”

“The alliance has been set up to be sustainable and inclusive. So it is not only about the number of people that are reached, but it is also the quality that counts”, Van der Male said.

Programmes are run in Africa and Asia, in which local alliances are set up to optimally make use of local knowledge and networks and tap into existing WASH structures.

The video that was launched by WASH Alliance International during the Stockholm World Water Week on 26 August.