“We need to join hands with nature to fill our water needs. It will become impossible to meet the greed of all individual people. We can change the war on water into peace”, ‘Indian water’ Rajendra Singh said in his key note during the opening ceremony of the Stockholm World Water Week on 24 August.

Singh is a former doctor who accidentally got involved in water management and brought water to more than a thousand Indian villages. For his relentless efforts to help villagers in arid areas to collect rainwater for dry seasons, he is awarded this year’s Stockholm Water Prize.

Prior to receiving the award later this week, Singh led hundreds of delegates for the first of a series of World Water Peace Walks (on top photo, in white dress) to take place globally in the next five years, spanning all five continents. 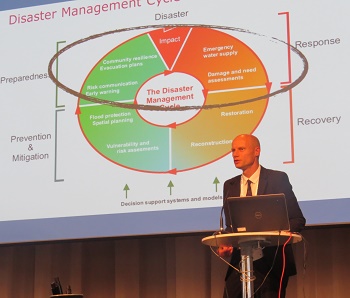 Competing claims for fresh water
Singh’s call for peace addressed the key issue of this year’s edition of the Stockholm Water Week. How to achieve universal access to clean water by 2030 when at the same time farmers, industries and energy production will also claim more water. How to preserve natural fresh water resources with an increasing extraction for human activities.

Living with water
Singh was not the only one who advocated to embrace nature. Less spiritual oriented and less water scarcity minded, but also with a clear call to embrace nature, were the two sessions conveyed by the Dutch delegation on disaster risk reduction, on the first day of the event.

Dutch water envoy Henk Ovink told that the Netherlands has learned that increasing hard flood defence structures to meet climate change are expensive and will put an ever increasing burden on the Dutch economy. “Therefore we developed the concepts of Living with water and Room for the river”, Ovink explained. New flood protection projects in the Netherlands now also include floating houses, urban water squares, green roofs, water storage underneath car parks and car parks constructed as a flood wall within dunes. 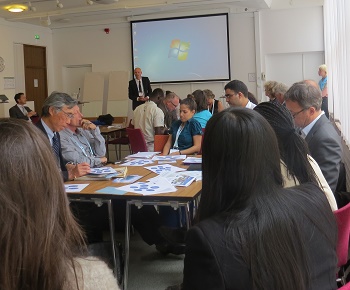 Participants of the DRR-sessions discussed the lessons learned from different cases of flood management in river deltas in the world.

Adaptive strategies
The two Dutch sessions showed that also the organisation of its water management is changing. “As a low-lying country in a delta of four large rivers we realize that we need to work on our water system forever”, Ovink said.

“We always have to start new projects. New is that we developed a long term strategy that puts all these projects in the perspective of the level of flood safety we want to achieve by 2100.”

Ovink compared it to the concept of ‘building back better’ but without a disaster that triggered it. “We want to be prepared. Not based on emotions but on clear cost-benefits analyses and strong risk management.”

Water-related disasters in river deltas
One of the Dutch sessions discussed the new initiative to launch an international coalition of countries to counter disasters, specifically for large river deltas. The Netherlands, Japan and Colombia took the lead in this initiative that will officially be presented next year. 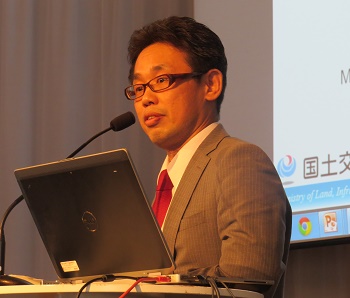 Kenichiro Tachi explained the new Japanese policy on disaster risk reduction that has an overall framework for all different types of disasters.

One of the speakers was director for international coordination Kenichiro Tachi of the Japanese Ministry of land, infrastructure, transport and tourism (MILT). During the session he explained that Japan is implementing a new policy on disaster risk reduction, based on multiple hazards.

Tachi: “We want one framework for resiliency that copes with all different hazards, including earthquakes, floods, tsunamis”. This Japanese approach with a general framework for all hazards is much in line with the Sendai agreement on disaster risk reduction that has been adopted in March of this year as part of the sustainable development goals. A technical commission is working on a general DRR-indicator with sub-indicators for specific hazards such as floods.

The participating countries in the Delta Coalition agreed to meet again later this year during the Amsterdam International Water Week.

Stay tuned
Stay tuned as news items on this website will keep you posted on the Dutch contribution to the Stockholm World Water Week.

Ministry of Infrastructure and the environment
The Hague, the Netherlands
+31 77 465 67 67
www.government.nl/ministry/ienm

Ministry of Foreign affairs
The Hague, the Netherlands
+ 31 70 348 64 86
www.government.nl/ministries/bz