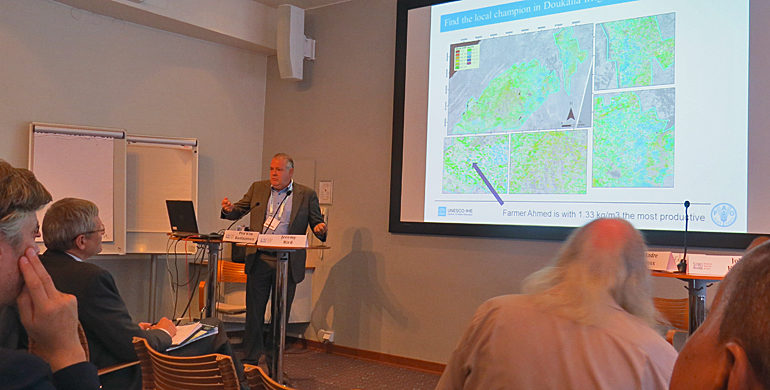 ”Some 72 satellites circle the globe every day, producing data that can be used to measure the water used by agriculture. This is all free information available for farmers and decision makers to improve their water productivity”, professor Wim Bastiaanssen of Unesco-IHE at the Stockholm Water Week on 23 August.

During a session on agricultural water productivity Bastiaanssen disclosed the start of the project by the United Nation’s Food and Agriculture Organization (FAO) to build a database that processes satellite data on evapotranspiration, biomass growth, water deficit and soil moisture.

The database will give insight in both excellent and poor farm practises when it comes down to the use of water on a local, national and global scale. It is to be used by farmers, farmers organisations, companies and policy makers. 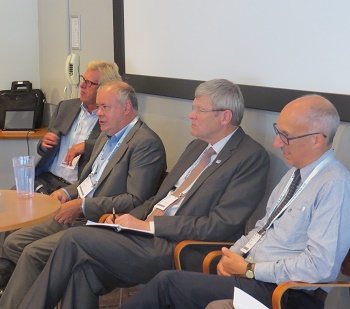 Panel discussion on the potential of the database to monitor sustainable development goal nr. 6.4 on water efficiency. Right Jean-Marc Faurès of FAO.

Monitoring agricultural water efficiency
According to Jean-Marc Faurès of FAO this database is a breakthrough because agriculture is accustomed to monitor only the land productivity. “The new open source database will add the water productivity of farmers.”

Faurès believes that the database can also be a used to monitor the water efficiency target of the sustainable development goal nr.6 on water. “It is a very standard method to measure the agriculture water efficiency worldwide.”

This UN water goal is to be adopted by the United Nations in September 2015 and in March 2016 a decision will be taken on the indicators and monitoring system. 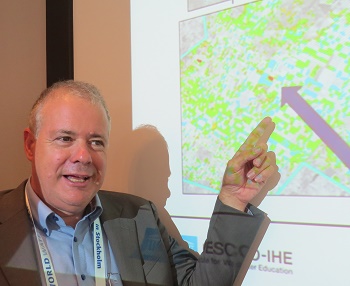 Bastiaanssen shows where to find the champion in the Douralla irrigation scheme in Morocco. A tiny red dot shows the farmer with an exceptional high wheat production using little water, compared to his surrounding neighbours.

Neighbouring farmers
The database is based on an algorithm developed by Bastiaanssen, that translates satellite data into water use given a certain crop. “A big advantage”, he explained at the session, “is that famers can compare their water efficiency with their neighbouring farmers.”

“We are used to work with only one figure for agricultural water use per country. This database will allow to zoom in on a country to the level of regions and even individual farmers”, said Bastiaanssen.

First step
The project is funded by the Dutch government and given the financial means the high resolution monitoring will not cover the whole world. “This project is a first step only”, Bastiaanssen continued, “We will use different resolutions ranging from 250x250 meter to 30x30 meter. Only a few selected areas will have the detailed 30x30 meter scale that is necessary to compare the water productivity of individual farmers”.

Satellite data collected between 2009-2017 will also be included in the database so comparisons can be made to signal changes in agricultural water productivity.

When the database will be available is not yet clear but it will not be ready untill 2017.