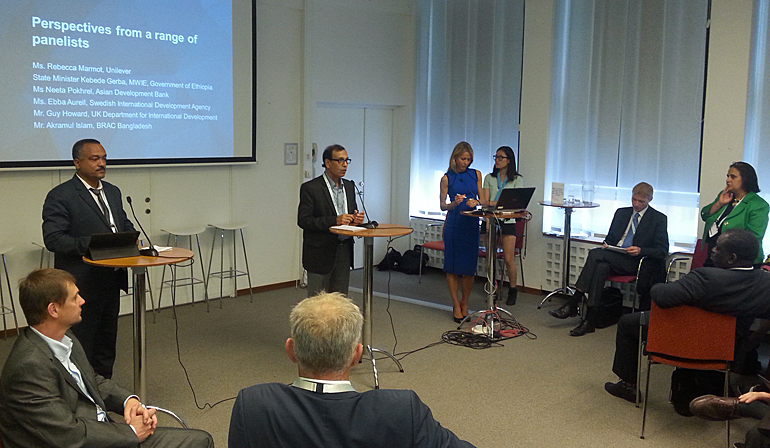 A dedicated water bank can attract additional investments that are necessary to finance the sustainable development goal nr.6 on water that calls for universal access to water and sanitation by 2030.

Financial expert attending a session on this matter at the Stockholm World Water Week welcomed the idea of a dedicated bank for WASH-projects. The details of such a bank were presented by the Dutch delegation.

Senior advisor Dick van Ginhoven of the Dutch Ministry of Foreign Affairs revealed that for his government the idea stage is already past and the establishment of a national water bank is imminent in Kenya.

The session took place on 27 August and was organized by the British Department for International Development (DFID), the Dutch Ministry of Foreign Affairs, the World Bank, Unicef and WHO. 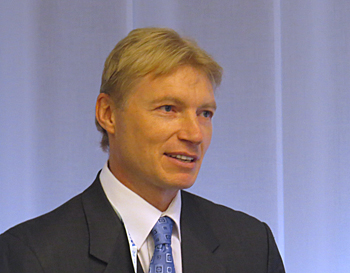 Developmernt economist Guy Hutton of the World Bank showed preliminary results of a study on how much money is needed for universal access to water and sanitation by 2030.

More money needed
An awful lot of money is needed to accomplish the sustainable development goal nr.6 on water by 2030, that is to be adopted by the United Nations late September. How much exactly is not really known.

At the session in Stockholm the presentation by Guy Hutton, development economist of the World Bank, indicated that worldwide 2.5 times more money shall have to be spent on water and sanitation.

Awareness of difficult financing in poor areas
There was consensus on the conclusion that the WASH-sector, especially in less developed countries, will have a hard time raising money for the additional water and sanitation projects that are necessary to expand their activities.

This especially goes for poor areas where additional income through tariffs or taxes cannot be guaranteed.

Different opinions on private versus public
Here the consensus amongst the attenders of the session stopped. In the audience some believed it is inevitable that private investors step in, while others argued that the private sector cannot deliver the low tariffs. Some put more faith in public financing and advocated to raise more money with smarter tariffs and taxes. 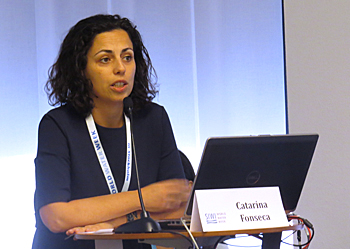 Catarina Fonseca of IRC presented the results of a study in 14 different countries that revealed the financial hardship in the WASH-sector.

Long term and less interest
More practical Catarina Fonseca of IRC Wash presented a study on how to bridge the financing gap in 14 countries. The study showed that it is difficult for water companies in developing countries to get long term loans with low interest rates.
Most of the companies have loans shorter than ten years, paying over 15 percent interest rates. An intermediating financial institute can lift this financial hardship, suggested Fonseca.

She mentioned three criteria that are essential for such an institution to be successful: a government support, a legislation on supervision and regulation, as well as good projects.

The idea of a water bank is not unfamiliar to the Netherlands. The Dutch water boards established a dedicated water bank, the Nederlandse Waterschapsbank, in 1954 when they needed large amounts of money to repair the levees that had been destroyed by the big flood one year earlier.

The Nederlandse Waterschapsbank is sharing its expertise to the establishment of the eight water banks for financing WASH-projects in less developed countries.

Ministry of Foreign affairs
The Hague, the Netherlands
+ 31 70 348 64 86
www.government.nl/ministries/bz

An animation explaining the principals of a financing facility for WASH-projects as shown at the Stockholm World Water Week.