World Water Forum 8: A look back on a forum under pressure to achieve SDG6 by 2030 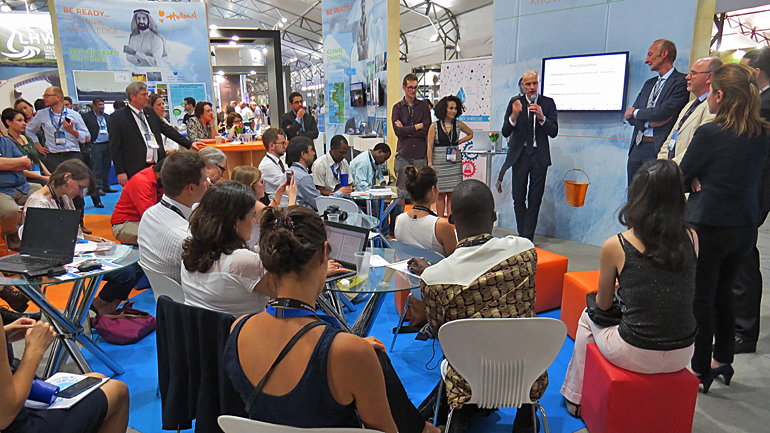 During the closing ceremony of the 8th World Water Forum the success of the Brazilian edition of the event was celebrated. The Forum took place in Brasilia from March 17 to 23, 2018. The organisers announced the registration of 10,500 participants for the conference and the exhibitions.

After presenting the results, the flag of the World Water Forum was passed to the delegation of Senegal, where the 2021 edition will be held.

Pressure is on
With only twelve years left to realise the ambitious UN 2030 agenda with its 17 Sustainable Development Goals, the growing tension was noticeable. The pressure is on.

Universal access to clean drinking water and clean sanitation is a huge task on the shoulders of the global water community. The will is clearly there, so there will eventually also be a way. But it lacks financing.

The twelve water ministers that were present, issued a Ministerial Declaration, which urges better coordination of UN activities in support of water-related goals, and encourages governments to strengthen their own national integrated water resources management (IWRM) policies and plans.

Citizens Forum
The organisers were particular proud of the success of the citizens village that was visited by over 100,000 people, of which some 40,000 children. The visitors had free excess to the village where they took part in educational, cultural, interactive, sensory and dialogue-building activities aimed at improving the use of water.

Dutch delegation
The Netherlands Pavilion again attracted many visitors. There were many presentations at the pavilion on a wide variety of water issues. The contribution of Dutch experts to the thematic sessions concentrated on integrated water resource management (IWRM), financing and disaster prevention.

Below a photo impression of some of the Dutch related contributions to an incredible amount of sessions that took place in five days. 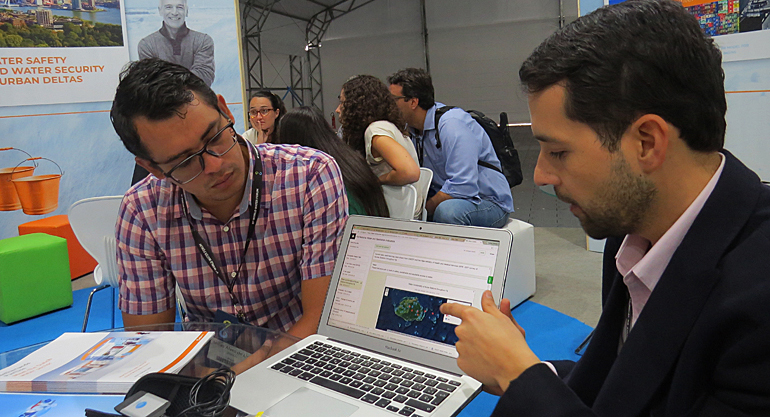 Carlos Diaz (right) of the Amsterdam-based non-profit organisation AKVO demonstrated in the Netherlands Pavilion the nationwide monitoring networks that have been established in eight African countries. New is the monitoring of e.coli contamination in drinking water for which a small plastic bag has been developed. In case of a contamination the bag changes colour. By taking a picture of the coloured bag on location, the contamination can automatically be reported to a national database via a cell phone. 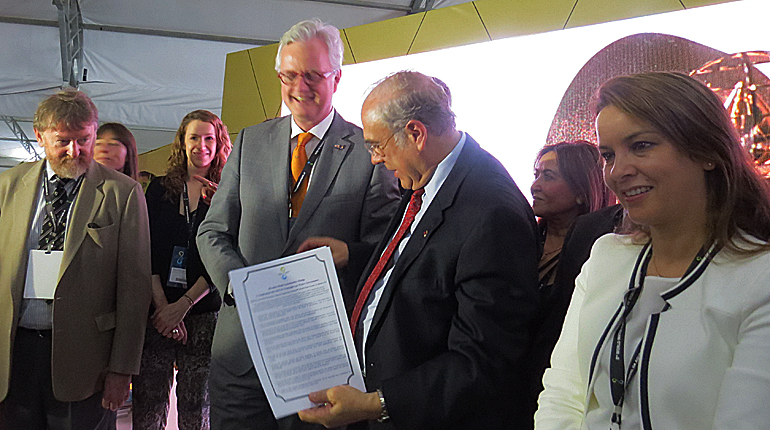 Peter Glas (middle left) of the Dutch regional water authority De Dommel, handed out a pledge to OECD’s Secretary-General Angel Gurría (middle). The hand out took place just after Gurria had been awarded the 6th King Hassan II Great World Water Prize by the Government of Morocco. The pledge called for the promoting of the OECD indicator framework on water governance. Some 140 organisations from the public sector, civil society, NGO stakeholder groups, academia, and the business community have already committed themselves to the framework. Glas, who chairs the OECD Water Governance Initiative, called for more organisations to join. On the right is Moroccan Minister for Water, Charafat Afilal. 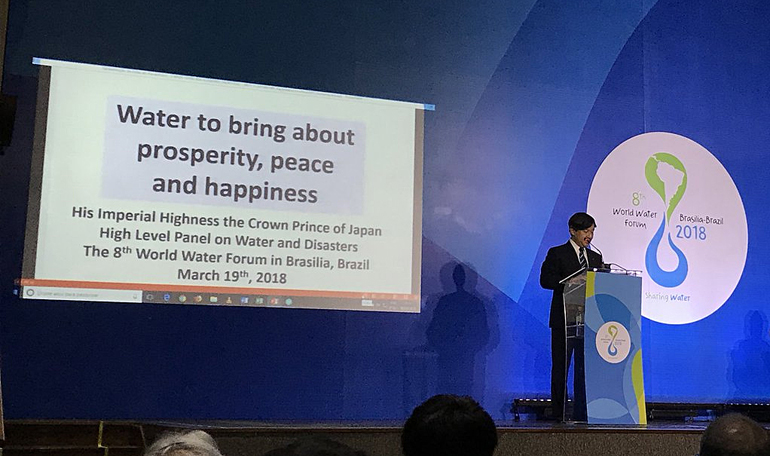 Japanese Crown prince Naruhito attended the World Water Forum for the fourth time in a row. In his 30-minute key note he explained the role that water plays in bringing peace and prosperity to people, citing examples in Japan and abroad. The Crown prince made his contribution during a session by the High Level Panel on disaster risk reduction (HELP), that was co-organised by the Dutch government. The central message of the session was to prevent a disaster, rather that rebuild afterwards. 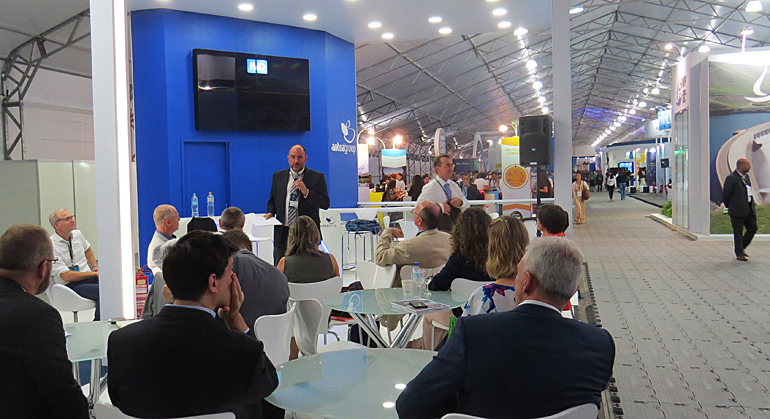 One of three Dutch-related booths in the Forum’s expo hall, was by engineering firm Antea Group. Three years ago the firm took an interest in Brazilian firm Angel. The São Paulo-based firm is specialised in environmental and soil and groundwater remediation, consulting on sustainability and QHSE, servicing global multinational corporations and also domestic clients within Brazil’s industrial and transport sectors. Antea took the opportunity of the Forum to welcome its, mainly industrial, clients from Latin America. The two other Dutch-related booths were the Netherlands Pavilion and a special pavilion on nature based solutions. 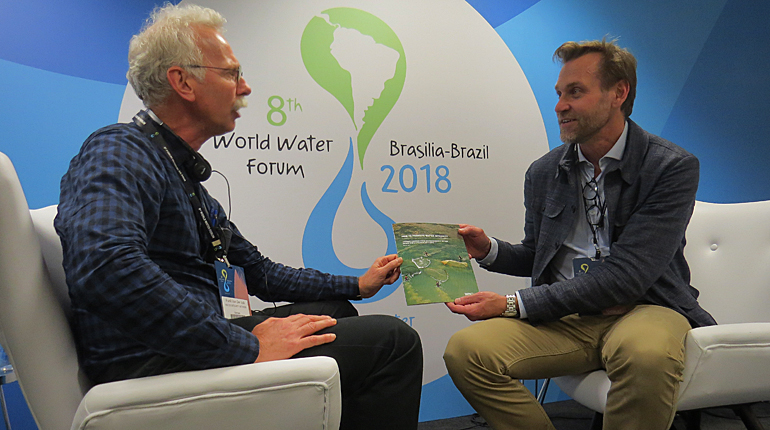 Frank van der Valk (left) of the Berlin-based Water Integrity Network (WIN) handed over an example of the just published report How to promote water integrity to Håkan Tropp, head of the OECD Water Governance Programme. The report gives 12 lessons to fight water corruption. In his reaction Tropp praised the report as it raises more awareness on corruption. Lesson 1: Corruption happens everywhere. Keeping it hidden makes it thrive. Being transparent about it can build thrust.

Our most important hidden resource: groundwater 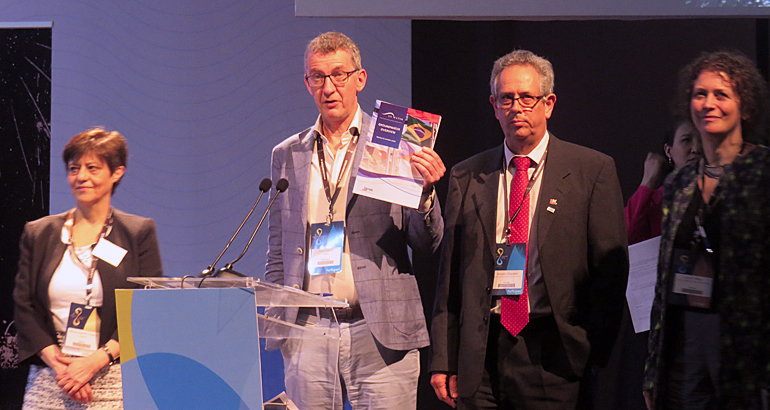 Neno Kurukic (second left) of the Delft-based UN's International Groundwater Resources Assessment Centre (IGRAC) launched the publication Groundwater Overview: Making the invisible visible. The launch was part of the global celebration of World Water Day during the forum on 22 March. IGRAC’s publication showcases the essentials and the credentials of groundwater, and informs about groundwater-related activities. According to Kurukic the publication is to enhance knowledge exchange and collaboration, and to raise awareness about our most important hidden resource: groundwater! 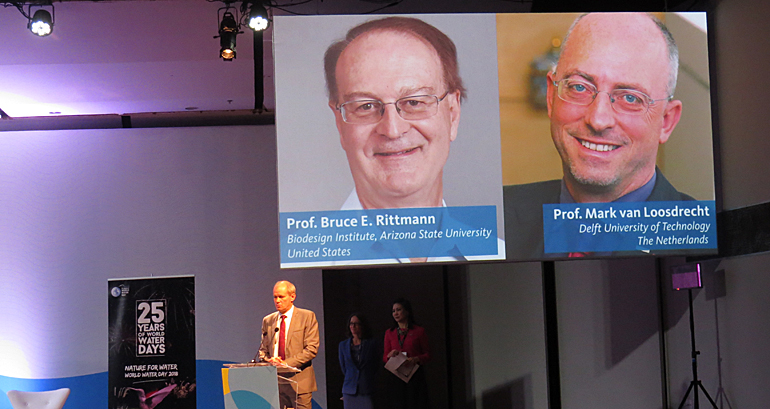 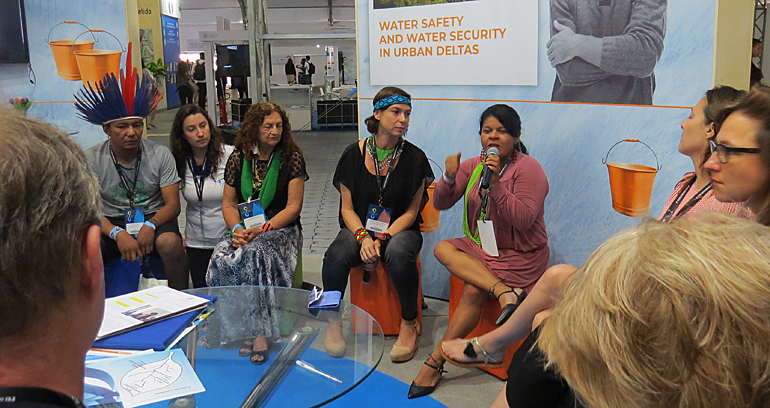 ‘Speaking about water is about speaking life itself’, said Sonja Guajajara who leads the Brazil’s Indigenous People Articulation (Apib) and is now running for vice-president of Brasil. A delegation of Brazilian indegious people visited the Netherlands Pavilion and expressed their concern about the disappearing water wells in the Amazone forests. ‘The dams and mining activities are drying and polluting our rivers. Agricultural monocultures such as soya and sugar canes give the final blow’, Guajajara said.

Sustainable use of water resources 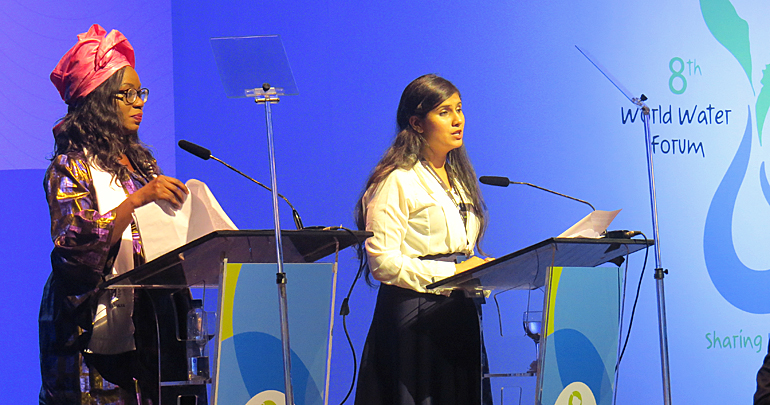 Who better to present the Sustainability declaration than the youth itself. Two young water professionals read out the Sustainability declaration during the closing ceremony of the 8th World Water Forum. The declaration mentioned twelve conditions of success, including the call to consider water problems no longer as a stand-alone issue. Number 10 specifically adressed the urge not to focus on the terrestrial part of water cycle alone - from crest to reef, including groundwater - but also to relate water issues to the oceans and the atmosphere, as a unique cycle. 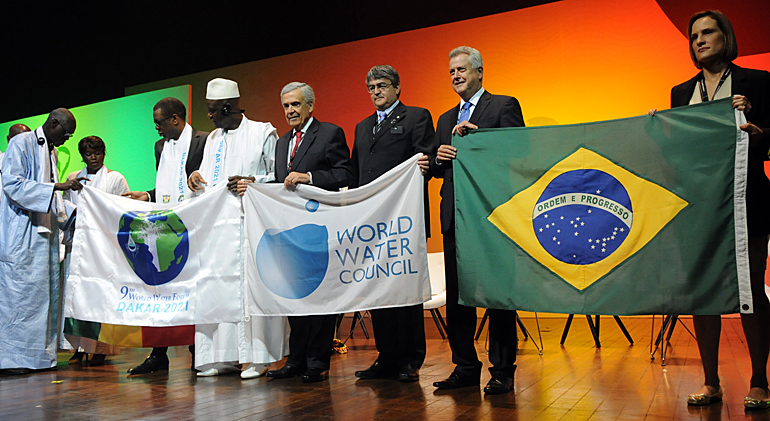